Malta gets a month’s worth of rain in one day 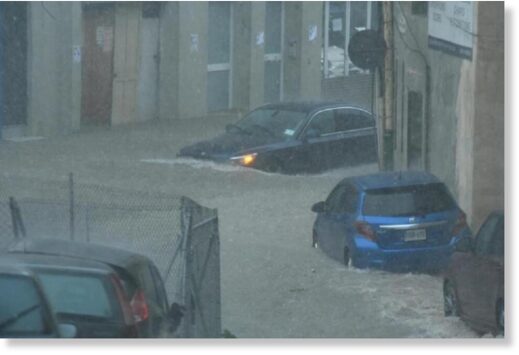 ﻿
Flash floods swept away cars, collapsed house walls and trapped motorists in their flooded cars after a month’s worth of rain fell in a matter of hours Thursday.

Police and Army units were deployed as roads turned into rivers, leading to numerous water rescues and road closures throughout the day.

An overburdened Civil Defense Department urged people to avoid valleys and areas near the sea. No fatalities were reported.

However, two officers had to be rescued by a Armed Forces of Malta helicopter when they were stranded while rescuing an elderly man stuck in his car in Burmarrad. All three were airlifted to safety.

In another dramatic situation, a family of four was on the roof of their cab in Salina when water rose around them. They ended up having to wade over a rope to escape.

“This is reportedly one of the worst storms in a long time,” the city’s police said, doubling the number of officers on duty to handle “an influx of calls for help.”

Police initially focused all of their efforts on rescue efforts, but by Thursday evening a cleanup operation had begun and they began responding to non-urgent calls.

The Meteorological Office issued an amber warning in the morning and reported an average of 74.6 mm of rainfall, with one weather station in Selmun reporting 107.6 mm in 24 hours.

This is above normal for all of November, with an average of 90 mm of precipitation.

Videos and photos from around the island show dozens of partially flooded cars, and poles, scooters and other debris were washed away by the flooding.

Police said they received a report of people in a car swept away by floodwaters in Żebbiegh, and two reports were received from Burmarrad of a motorcycle and car swept away with their drivers.

Animal Welfare Commissioner Alison Bezzina was among those trapped in their cars because of the downpour, and told how she spent two and a half hours in Birkirkar waiting for a tow truck.

Despite the chaos, she said, it “also helped restore my faith in humanity,” as delivery drivers and nearby residents offered her help and cups of tea before police arrived.

Several roads were closed, including part of Coastal Road, after a wall collapsed, and witnesses reported seeing floating cars.

Roads between St. Microelectronics and the airport tunnels in Kirkop, as well as near Casa Arkati in Mosta, were closed as cars stalled due to flooding.

Parts of Coastal Road were closed due to flooding and a wall collapse. Witnesses said they saw cars “floating” on Coastal Road around 11:30 a.m.

A lane on the Żebbuġ – Attard road was also closed due to a rubble wall collapse. The Bukana road between Rabat and Mosta turned into a river and was closed.

Severe flooding was also reported in Msida, Strand in Gjira and at the foot of T’Alla v’Ommu hill in Naxar.

In Gozo, parts of the soccer field in Nadur collapsed during heavy rain.

The chaos subsided late in the morning when the rain stopped.

This is the latest period of unusual weather to hit the country. October was the wettest in 64 years and the third wettest on record, and June saw the longest heat wave on record.

The Meteorological Office said Friday’s bad weather was caused by a low-pressure trough extending from Algeria toward the central Mediterranean.