Mass death of reindeer on the Yamal Peninsula in Russia may be linked to climate change, scientists believe 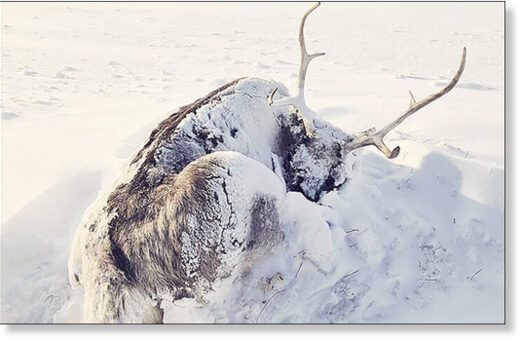 Thousands of domestic and wild animals died because they could not get to the food trapped under the ice.

New ideas to save reindeer herding are urgently needed for the Yamal Peninsula, say members of a scientific expedition that just returned from a trip to the northern tundra.

‘We observed dead reindeer all over the northern tundra, among them were wild reindeer, which also suffered from ice and lack of food. The herders showed us that their hooves were worn out because they had to dig so much ice,” said researchers Aleksandra Terekhina and Alexander Volkovitsky of the Arctic Research Station in Labytnangi, part of the Institute of Plant and Animal Ecology.

The first reports of winter rains, followed by extended periods of extremely cold weather in Yamal, appeared in December 2020.

Alarmed reindeer herders told us that the unusual weather caused the formation of a thick – up to three centimeters – ice cover over the lichen.

For reindeer, this means it’s impossible to get to forage when grazing in winter pastures, which is why the hooves of the dead animals the scientists saw were so badly worn.

Some domestic animals on the Yamal Peninsula had left the traditional winter pastures and followed wild reindeer in the hope of surviving.

By spring the number of animals that could have starved to death was in the thousands.

‘We are talking about thousands of animals, but the exact number of dead reindeer is not yet available, because reindeer herders are still roaming the Seyakha tundra, trying to get the herds together.

In all, there are about 65,000 reindeer in this northern part of the peninsula’s tundra. Not all of them were in the ice-covered area,” Alexandra Terekhina explained.

The last catastrophic death of domestic and wild reindeer on the Yamal Peninsula occurred in the winter of 2013-2014, when up to 90,000 animals died of starvation in three districts of the Yamal-Nenets Autonomous District.

Environmentalists believe that climate change may have caused the deadly combination of weather phenomena, such as thin snow cover followed by winter rains and then days of severe frost.

Our team made several trips to study snow profiles north of Sabetta and in the tundra between Labytnangi and Sabetta. We studied the layers of ice covering the soil and vegetation, and we saw that all the dark lichen-covered hill tops and slopes with little snow are also covered in ice,” says Alexander Volkovitsky.

Although periodic glaciations are typical of the Yamal Peninsula, scientists believe that climate change may affect their frequency and cause them to occur more often.

A mass mortality of reindeer caused by a similar combination of rain and cold was recently recorded thousands of miles southeast of Yamal on the Kamchatka Peninsula. At least 300 animals died in the northwestern part of the peninsula because they could not reach food through a layer of ice and snow.

Several other cases of mass deaths of reindeer due to icy rains have been reported this year in Norway and Sweden. Local authorities sent tons of fodder to the affected Arctic regions and developed programs of state support for reindeer herders.

Such support, such as free delivery of reindeer fodder and gasoline for snowmobiles, has been provided to reindeer herders by the administrations of the Yamal district and Seyakha village since last December.

‘We have to come up with radically new solutions. From the reindeer herders’ point of view, the Yamal Peninsula is quite populated, and there are not many free reindeer herding areas. In addition, and perhaps this is the main problem, since Soviet times the reindeer herders who inhabited the northern, Seyakha tundra were limited to this area, and in the past they moved the herds for the winter to forested areas,” says Alexandra Terekhina.