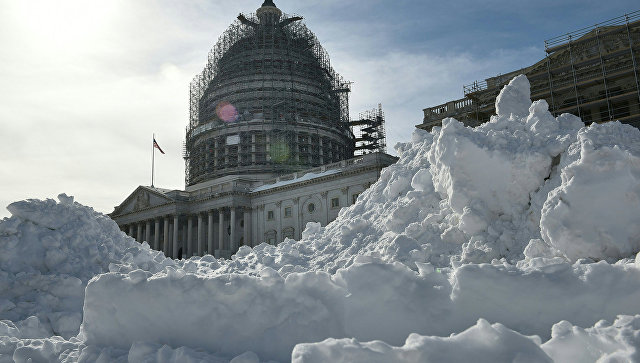 The further growth of summer and winter temperatures in the Russian and Canadian Arctic will lead to the fact that winters in the northeast of the United States will become even more severe and snowy, according to a scientific article published in Nature Communications.

“In fact, our observations confirm the history I have been talking about for several years.Warming in the Arctic periodically causes high winds to change their course dramatically, and when their currents deviate to the south, the cold air begins to penetrate there. because of which similar episodes of abnormally cold or warm weather last a very long time, “says Jennifer Francis, a climatologist at Rutgers University (USA).

Over the past few years, the north of the United States of America and southern Canada have been experiencing anomalously cold winters with heavy snowfalls and very low temperatures, which not only cause inconvenience to residents, but also cause heating companies to devastate natural gas reserves and even slow the growth of the economy. A similar situation is observed in the north of Asia.

Two years ago, climatologists from Korea suggested that the abnormally long winter colds are associated with the accelerated melting of sea ice in the Russian Arctic and drastic changes in the nature of the wind movement generated by this process.

Francis and her colleagues confirmed that this is indeed so, comparing how the climate in the region and the weather in the north of the US and Canada changed from the mid-20th century to the last year.

As the scientists explain, they were interested in three key parameters – the thickness of the polar ice cap, the number and strength of temperature anomalies in the Arctic Circle and how severe the winter was in the territories of different regions of the United States. Comparing these indicators, the authors of the article tried to understand whether there is a connection between the weather in temperate latitudes and the climatic processes in the Arctic.

It turned out that such dependence does exist, but not throughout the United States. Most brightly it manifested itself in the north and north-east of the country, in the vicinity of the Atlantic coast of the United States and in the Rocky Mountains, where the probability of a severe winter increased by about four times if the Arctic was dominated by a mild climate at the time.

Changes in the pattern of wind movement carried with them not only low temperatures, but also unusually high levels of precipitation. This, according to scientists, is in good agreement with the fact that over the last few winters, US utilities have had to use as much resources as possible to eliminate snowdrifts on roads and drifts in the streets.

Interestingly, such problems did not affect the western part of the country, where cold winters only came if the weather in the Arctic was unusually cold. The reasons for this have not yet been established.

As Frances suggests, in future such winters will become a private phenomenon, soon such processes will affect Europe and Asia.

“The last five of the six winter seasons were incredibly cold in the east of the United States, and warm and dry in the west, while in the Arctic there was record warm weather.Could this be a coincidence? I do not think it’s yet clear how much the Arctic affects the climate of temperate latitudes, but to ignore these relationships is becoming more difficult, “concludes the climatologist.