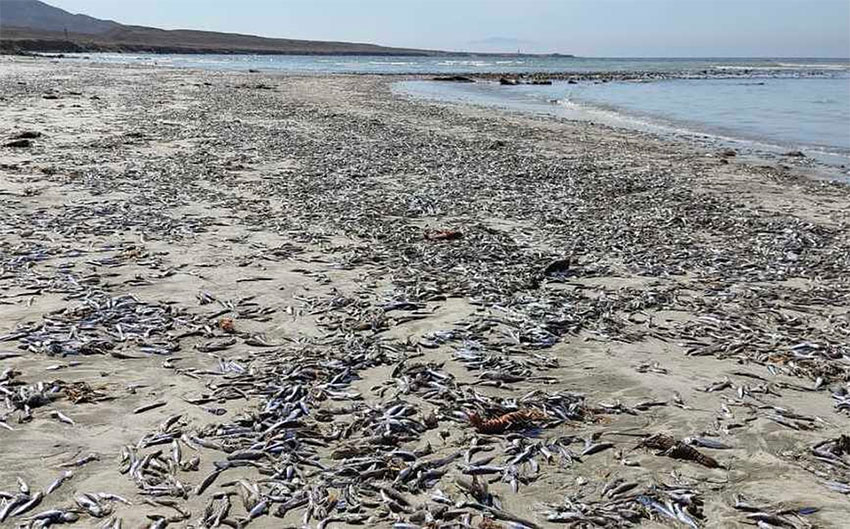 Thousands of tons of dead sardines, as well as other fish and marine life, were dumped onto the northern Pacific coast of Baja California Sur over the weekend in what local environmentalists called the worst marine environmental tragedy in the state’s history.

Huge numbers of sardines, and smaller numbers of other fish such as scallops and anchovies, as well as sea cucumbers and lobsters, some of which were still alive, were dumped on the beaches of Sebastian Vizcaino Bay, off the northwest coast of the municipality of Mulege.

According to local media reports, about 15 kilometers of shoreline were covered with dead sardines, which attracted hungry seagulls and even coyotes. Locals told El Sudcaliforniano newspaper that the event was unprecedented in its scale. Fernando Garcia Romero of the Baja California Sur Department of Fisheries said the fish die-off was caused by high ocean temperatures.

Higher-than-normal water temperatures caused hypoxia — an inadequate supply of oxygen — in the dead fish and sea creatures, he said. Local residents who returned the lobsters to the sea noted that the water was much hotter than usual and had a murky brown color, indicating a lack of oxygen.

Benito Emeterio Lopez, leader of the local fishermen’s union, attributed the fish die-off to climate change and the flow of hot water coming from Japan. Water temperatures off the coast of Baja California are normally 18 to 22 degrees, but in the area where the dead sardines were washed ashore it was as high as 30 degrees, according to local fishing cooperatives.

Temperatures have since returned to normal. The Milenio newspaper reported that the discovery of thousands of tons of dead fish “has been described by several local environmentalists as the biggest environmental tragedy recorded on the Baja California Sur coast.” Local fishermen said there is a possibility that large numbers of other marine species, such as clams, mussels and sea snails, also died, although they did not make it to the beaches.

There are also concerns that the high water temperature may have negatively affected the stock of abalone, on which hundreds of families depend for their livelihoods.