More than 1500 birds crashed on skyscrapers in Philadelphia, USA 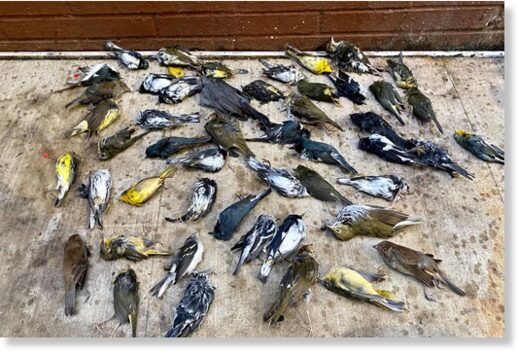 Stephen Matseevski was on his way to work when birds began to fall from the sky, crashing into a skyscraper and crashing to death.

Matseevsky says that on that day nothing foreshadowed something like this:

“So many birds were falling from the sky, we didn’t know what was happening. It was a truly catastrophic event.”

On Friday, up to 1,500 birds flew into buildings within a 3½ block radius of the Center overnight and early in the morning during what Matseevsky called the “perfect storm” of bird distress. He estimates that this could mean thousands of birds were more likely to die elsewhere in the city.

He collected 400 birds between 5 and 8 a.m. from about 17th to 19th streets between Market Street and John F. Kennedy Boulevard – an astounding number …

“There were so many of them that I took five at a time,” Matseevsky said. “One guy from the building maintenance department threw 75 live and dead birds in front of me as if they were rubbish.”