Moscow was struck by a powerful hurricane 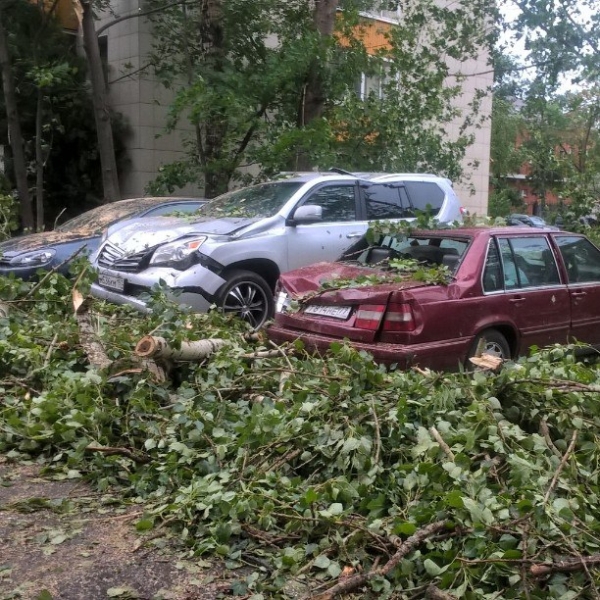 The storm struck Moscow, tumbled down more than 1,000 trees, tore roofs and the roofs of the buildings and damaged more than 120 cars, some can not be recovered.

Urban systems after passing over the capital storm front with Gale-force winds and rains are operating normally, said the press Secretary of the Deputy mayor for housing, utilities and beautification of Moscow Igor Pergamenshchik on Thursday.

“Disconnection of consumers and organizations from heat, water, electricity and gas supply there,” said Pergament.

According to him, the storm wind in the night threw the city’s more than 1,000 trees. “More than any other from the disaster suffered Zelenograd, NEAD, CAO, SEAD,” said the spokesman.

He stressed that mechanical damage due to falling trees and the hurricane received more than 120 cars.

Pergament also said that Muscovites about 120 times reported to the dispatcher service of GUP mosvodostok on pools of water. At 8:00 on Thursday works for 93 locations have been completed, the works involved 119 units of specialized vacuum equipment”, – he said.

The official representative of the municipality stated that due to thunderstorms in Moscow, seven people were injured, all were hospitalized.

The press Secretary stressed that the work on liquidation of consequences of hurricane in Moscow began immediately after the accident.

“Emergency crews are currently cut and take out fallen trees. The works involved approximately 1000 pieces of equipment and more than 1500 workers,” said Pergament.

As previously reported, in Moscow and the region as a result of the storm injured seven people, including 3 people in the Mozhaisk district of the Moscow region and 4 in Moscow. A source in the medical services of the capital reported that two men were injured by electricity during bad weather in Moscow.