Most of Larsen’s ice shelf collapsed 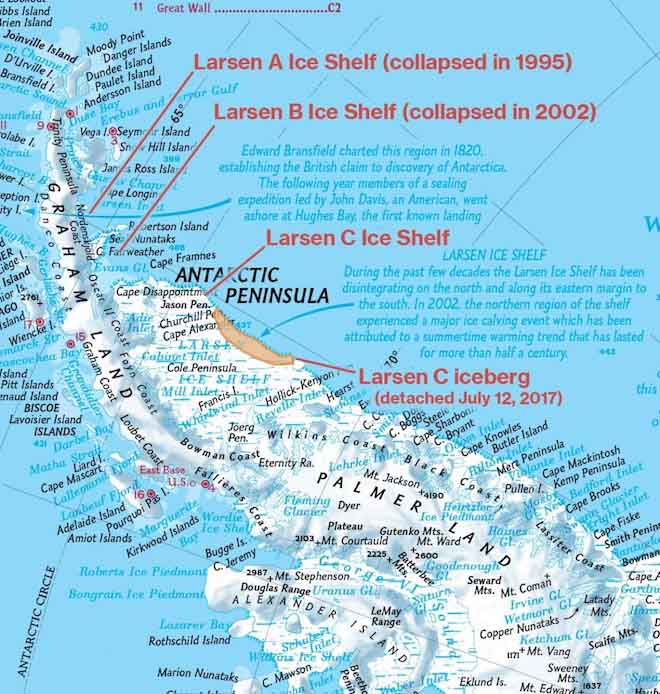 One of the largest icebergs, which broke off last week from the Larsen S Antarctic ice shelf, attracted the attention of the whole world. But, as scientists note, the reduction of the glacier has been going on for more than two decades.

If you look at the maps of the National Geographic Atlases of the World in the editions of 1990, 2005 and 2015, you can see how the glacier decreased with time, losing large fragments.

Last Wednesday, Larsen C lost about 2200 square miles. The giant iceberg was one of the largest in history, separated from the continent. The next edition of the atlas is expected to be released in 2019 and will reflect a new ice pattern. Shelf glaciers surround about 75% of the coast of Antarctica. These are thick floating ice platforms that are associated with terrestrial masses. The Larsen Ice Shelf, named after the Norwegian explorer Carl Anton Larsen, is located on the northeast coast of the Antarctic Peninsula in the Weddell Sea.

Although the involvement of climate change in this event has not yet been proven, a warmer ocean makes the ice shelves more susceptible to splitting and collapse. 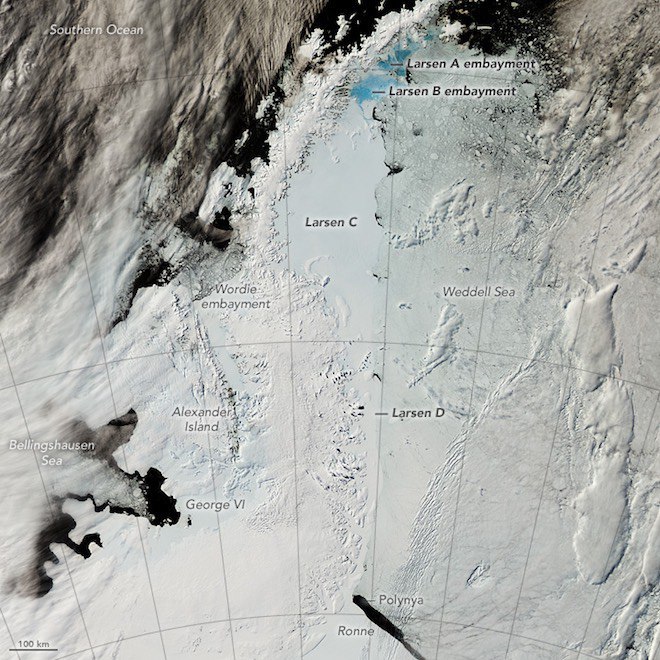 When NASA first photographed the Larsen glacier in the 1960s, the fatal split separating this iceberg from Larsen S was already visible.

Shelf glaciers are subjected to a natural process called calving, which consists in the discharge of large pieces of ice. However, the Larsen S iceberg is the third largest iceberg that broke off the ice shelf since 1995 – and such rates of disruption are of concern to scientists.

In January 1995, Larsen A, the most northern part of the Larsen glacier, lost about 770 square miles of ice during a storm when a large iceberg split further south. In 1999, the National Geographic Atlas of the World added a note on the ice shelf, first mentioning accelerated decay.

Then in 2002, most of Larsen B, which is located to the south of Larsen A, for a month split and collapsed, which reduced its area by another 1,250 square miles.

Scientists explained both of the split by a series of unusually warm summer seasons and especially in the warm summer of 2002. During this time, the researchers observed significant melting, noting that the melted regions act like wedges and further deepen the cracks already present.

In 2005, the National Geographic Atlas of the World was updated to reflect the split of Larsen B. According to scientists, the remains of the glacier, which are at least 10,000 years old, quickly disintegrate and are likely to disappear completely by the end of the decade.

The last iceberg, separated from Larsen C, weighs a trillion tons. If it completely melts, then the sea level will increase by 0.1 mm, said NASA climatologist Gavin Schmidt. Most likely, it will split into smaller pieces. Some of them may remain in the Weddell Sea for decades, while others can get into its circulation (Weddell Sea Gyre) associated with the ocean flow, and then the currents will carry them north of South America, to the west of South Georgia and the South Sandwich Islands.

As most of Larsen’s ice shelf collapsed, scientists fear that it may become less stable. The remaining ice sheets are also depleted at a rate of 1.8-2.7 m per year.