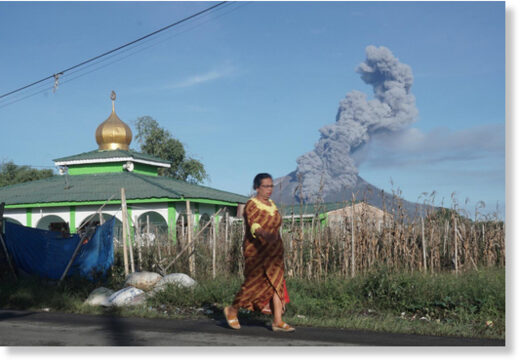 The Volcanology Center has warned the public about the danger of approaching Mount Sinabung in Karo County, North Sumatra, and has evacuated nearby settlements as the volcano spews hot ash.

On Sunday at 12:51 pm, the volcano emitted a column of hot ash. The ash spread about 1,500 meters southeast of the crater. On the same day at 20:58, he released another column of ash that spread about 2500 meters to the southeast.

“We need to be careful because the lava dome on Mount Sinabung is growing every day. This can lead to a huge stream of hot ash. ”

A lava dome or volcanic dome is a steep hill that forms as the lava reaches the surface of the earth. It can gradually expand as additional lava seeps in.

Pressure on the inside of the dome can cause a crack in the hardened outer shell, which could allow lava or other volcanic material to escape to the sides of the dome. If the lava dome expands rapidly, it could collapse, spewing deadly volcanic material.

The last series of eruptions occurred on August 10. Sinabung spewed a column of volcanic ash and smoke 5000 meters high.