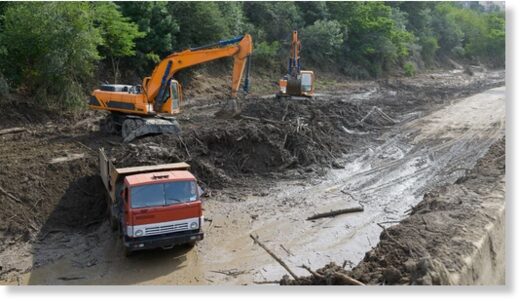 Heavy rains with thunderstorms occurred in the territory of the Republic of Dagestan last Monday. According to meteorological stations, up to 21-33 mm of precipitation fell overnight in the region, which is from 1/3 to 1/2 of the monthly norm in June.

The rains have led to numerous mudflows and rockfalls, resulting in 11 roads being blocked in several areas of Dagestan.

Stormy streams of water and mud swept away several vehicles, including a convoy of municipal vehicles caught in the mudflow. Detours were set up on all of the blocked roads and there are plans to clear the roads of debris in the next few days.

Several streets were flooded in the republic’s capital, Makhachkala. There, a girl standing by an open window was killed by lightning during a thunderstorm.