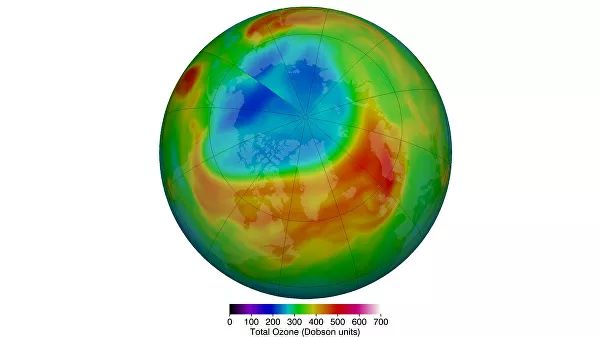 NASA researchers report an unprecedented depletion of the ozone layer over the Arctic. Analysis of satellite observations shows that the ozone level reached its lowest point at 205 Dobson units on March 12, 2020.

The stratospheric ozone layer, located in the range from 11 to 40 kilometers above the Earth’s surface, absorbs harmful ultraviolet radiation, which can harm plants and animals and affect people, causing cataracts, skin cancer and suppressing the immune system.

Unlike the Antarctic, where a real ozone “hole” appears in the Southern Hemisphere every year in September and October during spring, NASA researchers prefer to use the term “depletion” with respect to the ozone layer over the Arctic.

In comparison, ozone levels over Antarctica in the spring usually fall to around 120 Dobson units. In the Arctic, March values ​​sometimes drop to 240 units. Similar low levels of ozone occurred in the upper atmosphere — in the stratosphere — in 1997 and 2011. But this year a record was broken.

“Arctic ozone levels like this year are about once a decade,” NASA’s press release quoted Paul Newman, chief science officer at the NASA Goddard Space Flight Center. “ the general condition of the ozone layer, since the level of Arctic ozone is usually high in March and April. ”

Typically, these waves propagate upward from the lower atmosphere at mid-latitudes and destroy the contour of the circumpolar winds that circulate around the Arctic. At the same time, they bring ozone from other parts of the stratosphere with them, replenishing the reservoir over the Arctic, and also contribute to the heating of Arctic air. Higher temperatures create unfavorable conditions for the formation of polar stratospheric clouds that produce chlorine, which is involved in ozone-depleting reactions.

From December 2019 to March 2020, stratospheric wave phenomena were weak and did not violate the polar winds. Thus, the winds acted as a barrier, preventing ozone from other parts of the atmosphere from replenishing its level above the Arctic. In addition, the stratosphere remained cold, leading to the formation of polar stratospheric clouds, which allowed chemical reactions to release reactive forms of chlorine, such as chlorofluorocarbons, and cause depletion of the ozone layer.

Recall that the use of chlorofluorocarbons in industry was banned in the late 1980s by the Montreal Protocol on Substances that Deplete the Ozone Layer.

“We don’t know what caused the weak wave dynamics this year,” Newman said. “But we know that if we hadn’t stopped releasing chlorofluorocarbons into the atmosphere because of the Montreal Protocol, this year’s depletion of Arctic ozone resources would be much stronger. “