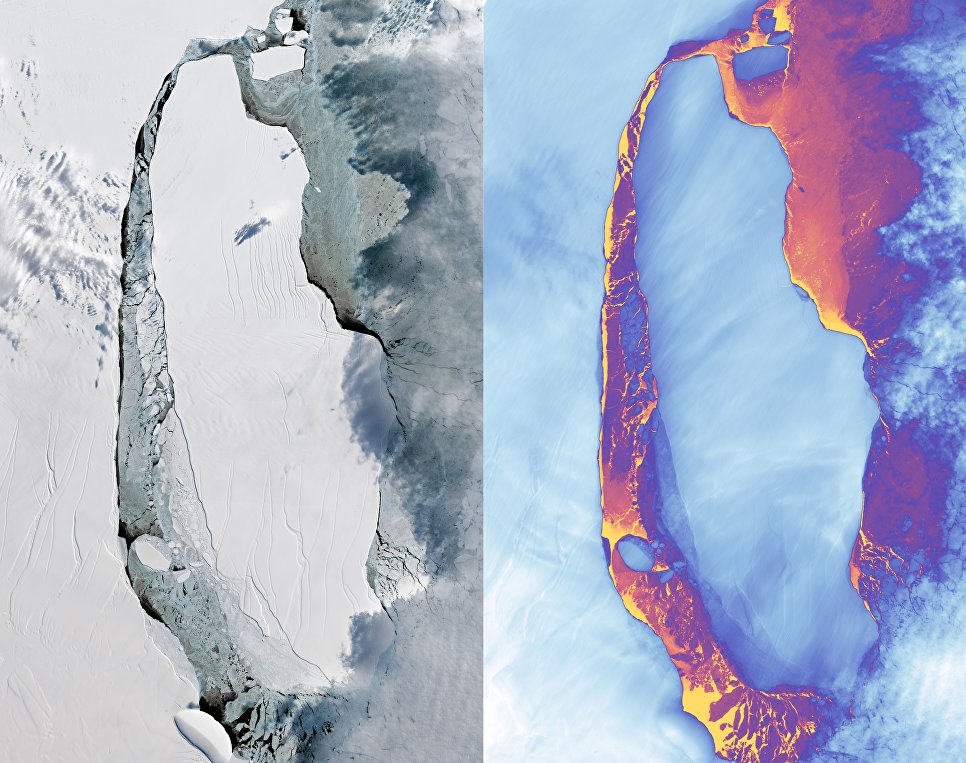 NASA satellites received the first detailed images of a giant iceberg, which arose in July this year after the split of the Larsen glacier, and recorded the first signs that it began to disintegrate.

“In July a polar night reigned over the territory of the whole Antarctic, so scientists had to study this iceberg using only radar and infrared images.The first photographs were received only in mid-September of this year.As shown by several weeks of observations, the iceberg A-68 initially” staggered ” on the ground, moving back and forth, and because of what it split into two halves, “- says NASA.

Climatologists, oceanologists and other scientists have long believed that climate change threatens to destroy mainly the northern ice reserves on the Earth – the glaciers of Greenland and the northern polar ice cap.

In recent years, this view has begun to change, as scientists have found evidence that the first can disappear not the northern ice, and part of the glaciers of Antarctica, which will lead to a catastrophic rise in sea level.

For this reason, NASA conducts continuous monitoring of the state of the southern ice in the IceBridge project, studying them with the help of reconnaissance aircraft, and ESA monitors their condition with the help of satellites Sentinel-1 and CryoSat-2.

These studies show that the most vulnerable and practically guaranteed candidate for destruction is the so-called Larsen Glacier on the eastern coast of the Antarctic Peninsula – it began to disintegrate in 1995, and the last fragments of this glacier, according to IceBridge data, were to begin their journey into oblivion this summer.

And so it happened – the last shots from the aircraft, received by NASA in the first days of December last year, show that in the glacier Larsen S, the last part of the ice massif of Larsen, a giant 112-kilometer-long crack, about 100 meters wide and about 500 meters deep meters.

This crack continued its rapid growth this year, reaching a length of 200 kilometers by July 2017, which led to the formation of a giant iceberg, whose area is about 6,500 square kilometers, which is comparable to the size of Estonia or the Moscow region.

While this iceberg is located off the coast of Antarctica, having retired from them for about 10-20 kilometers. The ice island “accelerated its movement in recent weeks after it split into two parts – a relatively small iceberg A-68B, and a larger fragment of the A-68A, whose area is about 100 times larger than that of its small fellow.

As scientists expect, the wind and currents will soon carry this mega-iceberg away from the shores of the southern continent and cause it to split into even more fragments. The A-68 itself and its potential fragments, as scientists now believe, can pose a great danger to ships in the southern hemisphere of the Earth.