NASA satellites recorded a record number of fires on Earth 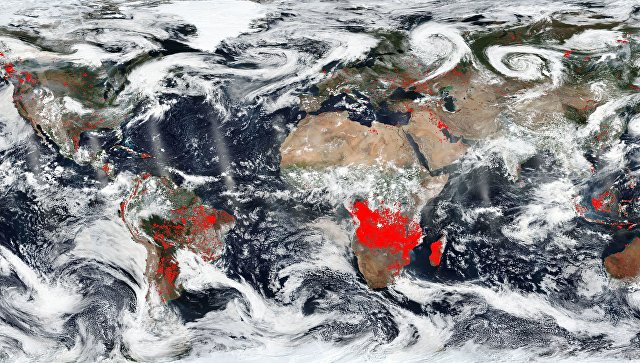 Every year, forests on almost every continent of the Earth burn in extensive fires, caused by both natural processes, and careless and even purposeful actions of people. For example, one of the reasons for the occurrence of fires in Transbaikalia three years ago were bonfires that were planted by the region’s inhabitants in the forests and for burning grass around the dachas.

Something similar, but in a more massive form, as NASA experts say, occurs in the southern part of Central Africa, where primitive slash-and-burn farming still prevails. Every year, farmers of this part of the “black continent” cut down and burn large areas of the jungle, use them for several years and then pelted, moving to new areas of the forest.

The proliferation of the African population, global warming and ignitions for other reasons, including lightning strikes, has led to the fact that the areas of fires have expanded significantly.

The latest images obtained by the VIIRS instrument on board the Suomi NPP climate satellite show that today thousands of fires are raging in equatorial Africa, which saturate the air with ash particles, aerosols, carbon monoxide and other combustion products. This, according to scientists, significantly worsens the air quality in Africa and adversely affects the lives of farmers themselves, using fire to clear fields.

A similar situation prevailed in the same latitudes of South America, where huge parts of the Amazon and the western coast of the continent were covered by fires. No less serious fire emerged in the forests of the USA and Canada, as well as in the territories of Eastern Europe, Russia, Australia and Southeast Asian countries.

In total, as shown by the analysis of data collected by VIIRS over the past week, there are now more than 30,000 forest and other fires on Earth. Some of them, as scientists say, arose not accidentally, but was associated with clearing fields and deforestation in Brazil and other countries with a high level of development of agriculture and mining.

The frequency and extent of fires, as NASA experts expect, will only grow in the coming years, especially in Australia and North America due to the fact that summer temperatures are constantly increasing and precipitation is constantly falling due to global warming.