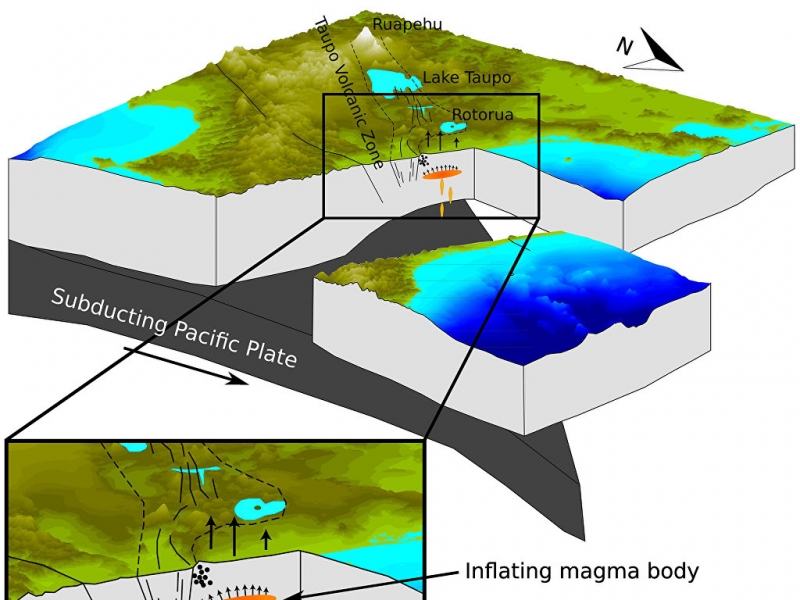 Satellite observations of the Earth in the vicinity of New Zealand showed that in the sea off the Northern tip of the island is formed of igneous camera, which soon may create a new volcano.

Through New Zealand passes Pacific “fiery belt” — band of volcanoes and tectonic faults in length 40 thousand kilometers. It surrounds the Pacific ocean, lying along coast southern and the North America to southern Alaska, then turns to Japan, the Philippines and Indonesia and ends near the island of New Guinea, New Zealand and the southwest Pacific.

It is in the “ring of Fire” is the vast majority of known volcanoes of a planet. There’s going 90% of all earthquakes on Earth. The last eruption of the volcano happened in New Zealand recently – in 2012, woke up the volcano of Tongariro, who played the role of Orodruin, the famous “mount doom” in the movie “the Lord of the Rings”.

Hamling, Ian (Ian Hamling) from the State research Institute of New Zealand in avalon have found that in a short time the Northern island of the archipelago, where all centers of volcanic activity, may become the owner of a new volcano, studying data collected by the probe Envisat in the past decade.

In the Northern part of the island and its surrounding ocean waters is the so-called volcanic zone Taupo, where in recent years earthquakes occur and outside of which is the largest of the volcanoes of New Zealand – Ruapehu, Tongariro and Ngaruhoe.

By studying changes in the surface elevation in this area, scientists noticed that it rises up at a rate of 1.5 cm per year, whereas the surrounding areas, on the contrary, fall down at a speed of one centimeter per year. So rapid in geological terms, the rise of the soil means that the area in Taupo has a new magmatic chamber, which is filled with light and with respect to the liquid flow of molten rock from the lower layers of Earth’s interior.

The heart of this camera, according to calculations of scientists, is not on land but under water, a few hundred metres from the Northern shores of New Zealand, at a depth of 12 kilometers. Every year the volume of this “lava pool” grows by 0.01 cubic kilometers, which is comparable to the growth rate of the magma chambers from other relatively new and large volcanoes.

This discovery surprised Gamling and his colleagues, as the volcanoes did not Wake up in the vicinity Tuapo for at least 425 thousand years. While scientists do not know when the tank would spawn a volcano, but they believe that the eruption will eventually take place. This focus, according to the measurements of surface height, held in the 18th century, has been growing for three centuries, and the rate of accumulation of magma has increased markedly, an increase of three times in the last 10 years.

Major cities and towns of new Zealanders, as they say scientists, is located just 50 kilometers from the magma, suggesting the need for early consideration of the status of this potential volcano hazard evaluation, which he may carry to the residents of the archipelago.