North Bridge melted ahead of schedule 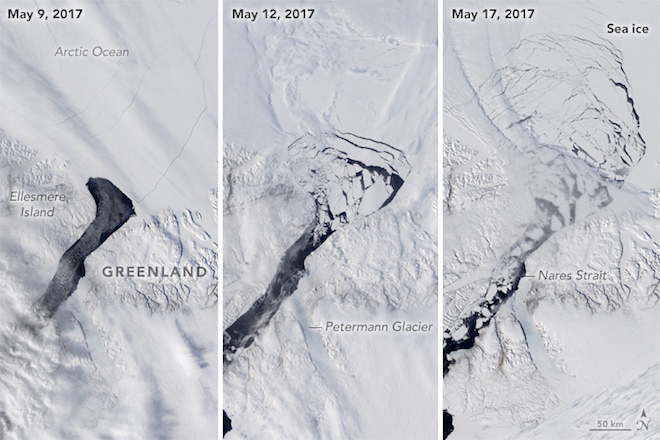 The Arctic Ocean is mostly surrounded by the northern outskirts of Eurasia and North America. As a result, fragments of drifting pack ice have few exits from the Arctic, when in the spring and summer the sea ice becomes thinner and breaks.

The main corridor is the Fram Pass between Greenland and Spitsbergen. But there is a narrower waterway to the west, the Nersa Strait, which separates Greenland and Ellesmere Island. Scientists follow Nars, since the current flowing to the south and fed by the Beaufort Circle, every summer and autumn carries a significant amount of ice through it.
The volume of ice passing through the Nersa Strait this year is likely to be higher than usual. The bridge of pack ice, which blocks the entrance to the strait, collapsed very early. As a rule, ice bridges between Ellesmere and Greenland are formed in January and melt in early July. In 2017, sensors on NASA satellites recorded the destruction of ice in mid-May. The image on the left was obtained on May 9, when the bridge was still intact. By May 12, large fragments of sea ice began to split and go into the strait. By May 17, the area of ​​destruction in the north became even greater.

“There is nothing catastrophic in this event,” said Nathan Kurtz, an ice specialist from NASA’s Space Flight Center. “But it’s worth noting that the early split of this bridge makes some of the oldest and thickest Arctic sea ice more vulnerable, which increases the flow of ice across the strait.”
This is bad news, as an unusually warm winter has led to the fact that the total length of Arctic sea ice in the period from January to May 17 is already significantly lower than the average value of 1981-2010.
Early cleavages of ice bridges have occurred in this region before. In 2007, this bridge was not at all due to the warm winter weather preventing its formation. According to the analysis of satellite data, this doubled the amount of ice that passed through this strait that year compared to the average amount. Although the increase was significant, the total flow of ice across the Nersa Strait was only 10% of the ice mass passing regularly across the Fram Strait.