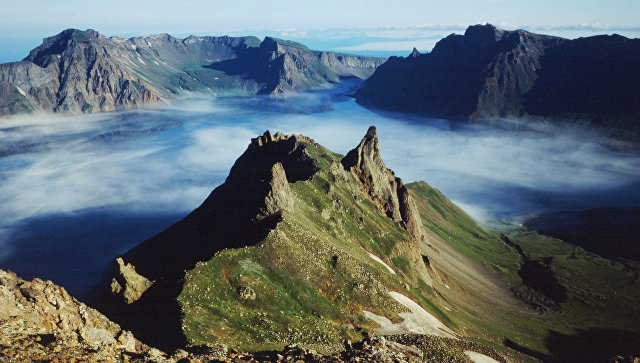 Ruins of houses, extinct streets and sun-covered ash. This is not the result of a nuclear war on the Korean Peninsula, but the possible consequences of the eruption of the Paektusan volcano, located on the border of North Korea and China. The last time it made itself felt more than a thousand years ago, and in the coming years, scientists expect a new powerful explosion. And it can be provoked by the continuing nuclear tests of the DPRK.

About when to wait for the disaster and whether Pyongyang can speed up the advent of the “Judgment Day” by its actions, – in the material of RIA Novosti.

The impending eruption of the volcano Paektusan (in China it is called Changbai Mountain) continues to bother scientists around the world. By its power it is second only to the super volcanoes, erupting once every 100 thousand years and capable of causing climate change on the whole planet. The power of the sacred Korean mountain of Paektu is an order of magnitude smaller, but it can surpass the power of the explosion of the largest thermonuclear bombs ever experienced by mankind ten times. Over the past two thousand years, there have been just four such eruptions around the world, but a fifth may soon happen.

According to Chinese scientists, since the early 2000s small earthquakes have been regularly observed in the area of ​​Paektusan. The edges of the crater of the volcano are gradually growing, the temperature in nearby thermal springs increases, and also the concentration of helium. All this may indicate the return of the volcano to the active phase and the impending eruption. Volcanologists believe that in 10 kilometers under the mountain there is a large focus of hot magma, which gradually replenishes from the underlying foci and sooner or later splashes out. 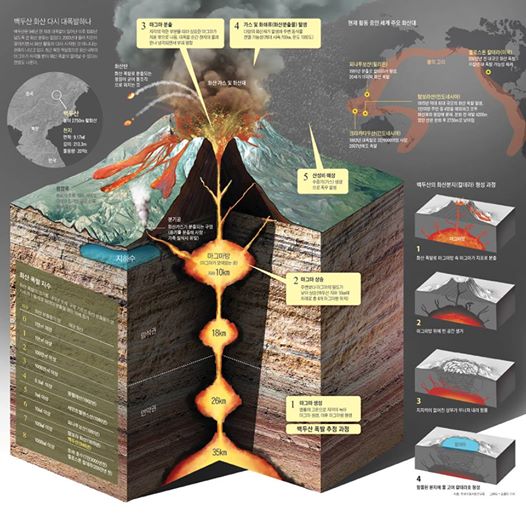 Volcanoes like Paektusan erupt about once in a thousand years. And considering that the last powerful eruption of Belogolova Mountain occurred in 946, it is quite possible that now it is gathering strength for a new powerful explosion. For more than a million Chinese and North Koreans living in this region, the consequences of it can be catastrophic.

The eruption by force in seven points in due time has caused release of a huge quantity of the heated stream of gas, ashes and stones which, flying with huge speed, destroyed all alive on the way. And from the ruptured top of the mountain flowed lava flows, burning all the surrounding vegetation in the fires. Even after a millennium, the ecosystem of these places has not completely recovered.

A new explosion can be even more devastating. Two billion tons of water from the formed in the crater of Lake Cheongzhi can provoke powerful floods, overflowing the largest border rivers Amnokkan (Yaluqiang) and Tumangan (Tumyntsyan, or Tumannaya – that is where Russia borders the DPRK). In addition, interaction with water will lead to even more ash, which can eclipse the sun for several months, triggering an effect similar to nuclear winter. As a result, the average temperature in Northeast Asia will fall by two degrees.

However, as noted by scientists, the eruption at this stage is difficult to predict. During a deep dormancy, Paektusan woke up more than once, limited to small emissions. However, the last time it was also more than one hundred years ago. Therefore, even if the eruption is half as large, ash clouds will reach the neighboring countries. If it happens in the summer, it will cover mainly the northeast of China and the DPRK, as well as the south of the Russian Primorye. If in winter, when the western winds blow, the ashes will fly towards Japan and the south of the Korean peninsula.

The main dispute between scientists, however, is now connected not with whether to wait for the eruption or not, but for how soon it will happen.

Do not wake your head until it’s quiet

From the nuclear range of Phungery, where North Korea conducts its tests, only 115 kilometers to Pektusan. As a result of the last test, which caused an artificial earthquake of 5.7 points (according to other estimates, up to 6.1), there followed another series of small earthquakes that already occurred, it is believed, due to partial collapse of rocks. In this regard, some experts believe that if the DPRK continues to experience devices of increasing capacity, this may eventually provoke the eruption of Paektusan.

According to the calculations of South Korean scientists, a nuclear test with a capacity of more than megaton in TNT equivalent, causing an earthquake of seven points, will create pressure on magma chambers at 120 kPa, as a result of which they can simply jerk. 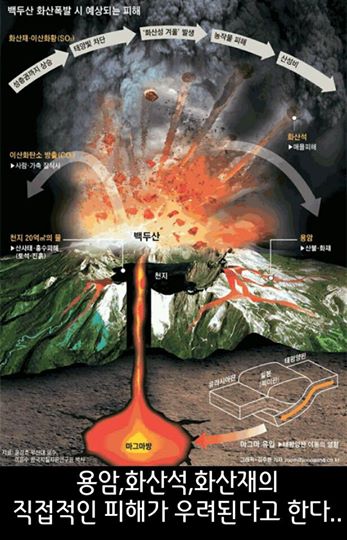 However, this is in a pure theory, there have not been any real cases of “acceleration” of volcanic eruptions. For more than half a century of the existence of the American nuclear testing ground in Nevada, where underground explosions were conducted 921 times, including the power of more megatons, nothing terrible happened. Although less than 300 kilometers from the landfill is located Long Valley – one of the largest sleeping super-volcanoes of the Earth. There were no eruptions during the tests in 1971, when a bomb of five megatons was tested at a distance of 90 kilometers from the three active stratovolcanoes of Alaska. The subsequent earthquake of 6.9 points did not awaken 62 sleeping and active volcanoes on the Aleutian Islands.

According to American experts, this is primarily due to the fact that artificial earthquakes are mostly high-frequency, while natural ones that can actually cause volcanic eruptions are low-frequency ones. However, the structure of the magma and its surrounding rocks is always different, and much remains in the activity of volcanoes for scientists, so the possibility of an eruption provoked by a nuclear test is not completely rejected by anyone.

When the next explosion of Paektusan occurs, scientists of South Korea can not predict precisely. The only thing volcanologists are sure of is that an eruption is inevitable. And with the increasing intensity of the North Korean tests, it is almost impossible to predict the time of the cataclysm.