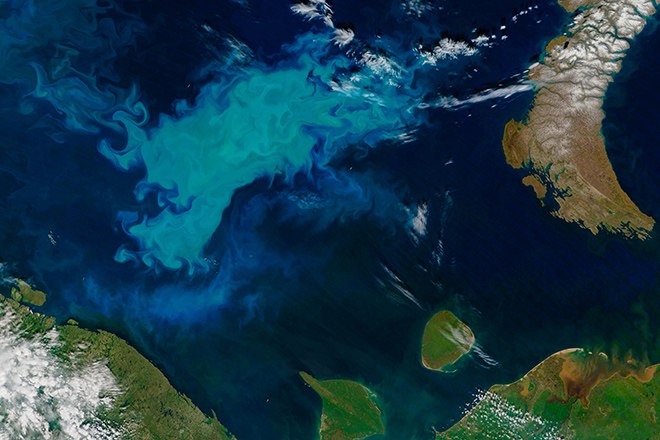 The white spot in the Barents sea is so vast that it is visible from space. It is not the result of a spill of toxic chemicals or the sinking of the filled milk tanker. This is the work of millions of microscopic algae, which is one of the oldest types of phytoplankton.

Algae Emiliania huxleyi produce ultra-thin shell of limestone that surround their single-celled body. Although it is not clear why they need the algae, according to scientists, they bring significant benefits to the world.

To create their calcareous carapace, E. huxleyi “eat” dissolved in water carbon. When I grow a new shell, they shed the old, and those deposited on the bottom of the ocean. As more carbon dioxide accumulates in the atmosphere and is absorbed by the ocean, E. huxleyi and similar types of obyzvestvleniya phytoplankton take it and process it — just as trees “breathe” carbon dioxide. This work is so extensive and laborious that as a result of a similar process of the famous White cliffs of Dover in the South East of England acquired their distinctive color. The calcareous shell was accumulated there for tens of millions of years.

For obyzvestvleniya of phytoplankton, among which E. huxleyi is the most common, the increase in carbon content in the environment means a greater amount of “building material” for creation of the shell. But it is for algae only benefit up to a point.

As people filled the air of carbon dioxide and greenhouse gases that cause global warming, most of the carbon dissolved in the ocean, resulting in increased acidity of the water. Ocean acidification destroys the protective shells of corals and molluscs, which are made of the same material as the shells of E. huxleyi.

Ultimately, the increase in ocean acidity will lead to the fact that such types of phytoplankton, as E. huxleyi, ceases to form calcareous shells. The more phytoplankton “loses its appetite” for carbon, the more it remains in the environment. This, in turn, can lead to deterioration of the impacts of climate change, said Torsten of Rois, a marine ecologist from the Centre for ocean research Kiel Helmholtz and senior author of the study.

To find out how the phytoplankton will adapt to further changes in its environment, the scientists placed identical clones of E. huxleyi in water with different pH, including the one that is observed in the ocean today.

In the laboratory E. huxleyi grow very quickly, producing a new generation about once a day. For four years, algae have copied themselves to 2100 times, allowing scientists to observe how species will evolve in the predicted ocean conditions.

In the first year of the experiment, E. huxleyi, responded to acidification of water by reducing the elaboration of their shells. But in the end algae is still adapted to the new conditions and again was engaged in the formation of calcareous shells.

However, under strong acidification of the oceans phytoplankton can not produce shell and at the same time to maintain proper body chemistry. Instead of forming the shell, they switch to survival mode. After four years of simulated ocean acidification phytoplankton ceased “lime production”.

When the scientists returned the algae in normal conditions they again began their “work”. “E. huxleyi know when to cost reduce “production”, as it starts to cost them too dearly in the circumstances. And run it again when the environment state is normalized”, — said Reus.

Phytoplankton is vital for ocean and around the world. Microalgae form the basis of the marine food chain and are responsible for the production of most of the oxygen on the planet. “Each of our inhaling becomes possible due to their photosynthesis,” — said Reus.

The study showed that it is possible to restore the carbon cycle involving phytoplankton by returning them to nezamylenny the ocean, however, this scenario, according to scientists, is not expected in the foreseeable future. Even if we are able to reduce the content of carbon dioxide in the atmosphere currently, ocean acidification is likely to continue.