On Kamchatka Klyuchevskaya’s volcano has thrown out ashes on 5,5 kilometers 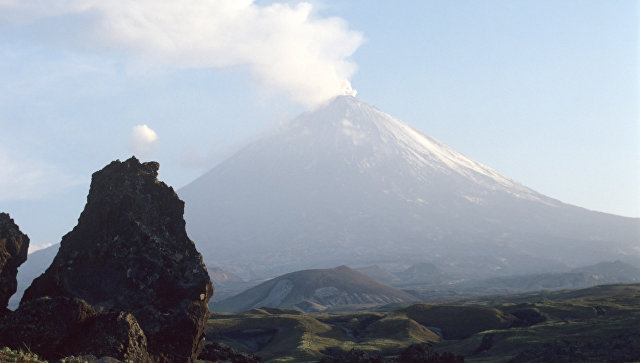 The highest active volcano of Eurasia — Klyuchevskaya Sopka on Kamchatka — has thrown out ashes on height of five and a half kilometers above sea level, the head department of the Ministry of Emergency Measures in the region reports.

“In the morning on November 4, 2016, according to satellite data of the Kamchatka group of response to volcanic eruptions (KVERT), on Klyuchevskaya’s volcano peplovy emission has been recorded. Height of emission of ashes has made to 5,5 thousand meters. Volcano height — 4 thousand 850 meters” — it is said in the message.

It is noted that taking into account the direction of wind the peplovy loop has extended to 112 kilometers in east direction from a volcano towards Gulf of Kamchatka. On the way of distribution of a peplovy loop settlements are absent.

“According to the carried-out information exchange with dispatchers of EDDS of municipal districts, loss of ashes in settlements of Kamchatka Krai isn’t recorded” — have added to the Ministry of Emergency Situations.

Tourist groups around the Klyuchevsky volcano aren’t registered. The “orange” code of aviation danger is assigned for a volcano.

The Ministry of Emergency Situations have noted that in the morning on Friday peplovy emission to two kilometers above sea level has also been recorded on Shiveluch Volcano. The loop has extended to 190 kilometers in east – South east direction from a volcano, towards the gulf Lake.

The volcano Klyuchevskaya Sopka — the highest active volcano of Eurasia — is located in Klyuchevsky group of volcanoes, at distance of 60 kilometers from the Bering Sea. Its height makes 4 thousand 850 meters. The next settlement — the settlement Keys — is approximately in 45 kilometers from a volcano. The previous eruption of Klyuchevsky was observed from January to March, 2015 and about three months proceeded. This year the volcano Klyuchevskaya Sopka has begun to be thrown up on April 3.

Shiveluch — the most northern active volcano of Kamchatka. He is located approximately in 45 kilometers from the settlement Keys. Height of Shiveluch — 3 thousand 283 meters above sea level. The volcano is thrown up since spring of 2009, his eruptions, as a rule, have explosive character.