On the coast of Mexico 54 dolphins 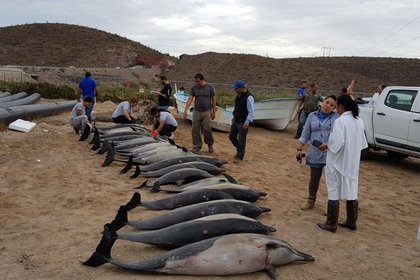 A few dozen dolphins were found on the seashore in South Baja California in Mexico. Out of 54 individuals, only 33 were rescued, the rest were killed.

Employees of the Federal Agency for Environmental Protection stated that all animals are representatives of the species common dolphin (or dolphin-white cap). According to experts, to force them to throw themselves on the beach could be attacked by larger bottlenose dolphins. The bodies of the dead and injured mammals have found traces of their bites.

Specialists will conduct an autopsy to establish the exact cause of what happened. An ordinary dolphin usually reaches a length of not more than two meters, while bottlenose dolphins can in some cases grow to 4.5 meters.