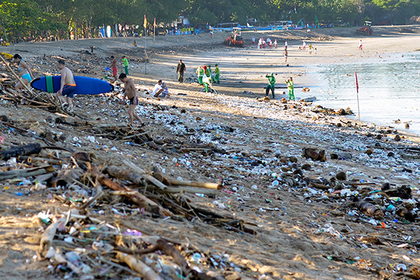 The authorities of the Indonesian island of Bali declared a state of emergency because of the debris that it takes out of the sea on the coast.

As the newspaper writes, Indonesia is the second largest in the world after China in the ranking of states with the largest amount of debris in the coastal zone. According to experts, the country annually produces 1.29 million tons of waste.

The last significant pollution of the coastal zone in Bali arose after the annual monsoon season – the wind brought the garbage to the beaches. The government organized a campaign to clean the coast, for which 700 cleaners were hired. 35 trucks are taken daily from the popular beaches of Jimbaran, Kuta and Seminyak about 100 tons of garbage.

According to scientists’ forecasts, by 2025 the amount of garbage can increase by 70 percent.

Plastic waste represents a particular danger to the environment. In particular, toxins get into the fish, it becomes dangerous for those who consume it for food.