Over the US because of fires there were pyrocumulus 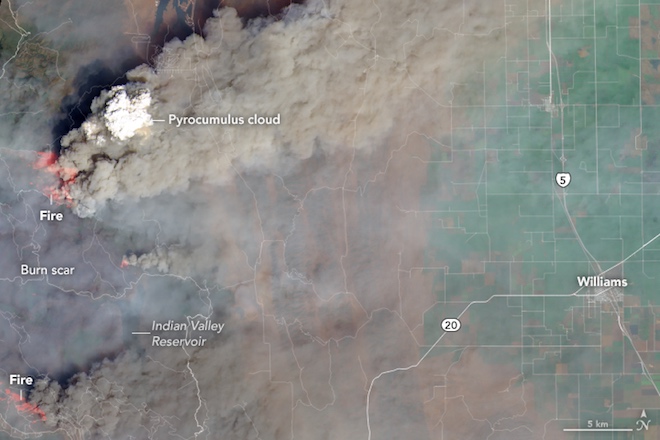 In July and August 2018, high smoke clouds from fires rose above Northern California.

One of the hotbeds, which received the name “Mendocino Complex”, was named the largest fire in California for the entire history of observations – the fire passed more than 1200 square kilometers (the area of ​​New York). The “Carr” fire raging near Redding destroyed more than 1,000 houses, which made it the sixth in destructive consequences for the whole history of observations. Several thousand firefighters struggle with each of the centers.

The heat generated by intensive forest fires can lead to the fact that the pyro cumulative clouds caused by them, raise smoke above the lower layer of the atmosphere. The hotter the flame, the higher the smoke can rise and the farther it can spread.

The smoke rising above the boundary layer of the atmosphere often overcomes hundreds or thousands of kilometers from the source before it sinks down. The satellites observed how the smoke from the California fires spread to almost two dozen states. On August 6, 2018, the OLI tool on NASA’s Landsat 8 satellite took a snapshot of a dense column of smoke topped by a pyro cumulative cloud. Smoke came from the fire Ranch fire. In a photo taken on August 2 by an astronaut on the ISS, another cloud is visible, rising from the fire in Ferguson near the Yosemite National Park. The park service closed the Yosemite Valley and other parts of the park due to heavy smoke. 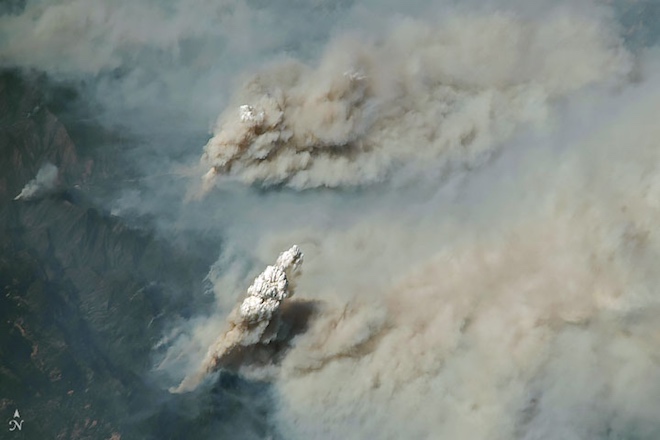 According to meteorologist Scott Bachmeyer of the University of Wisconsin in Madison, many of the major fires in California almost every day led to the formation of pyro cumulative clouds. While a significant part of the smoke is emitted to great heights, some of it is in the boundary layer, reducing visibility and affecting the quality of air near fires.

In Sacramento County, authorities asked people to stay indoors, in some parts of South Oregon, ground sensors recorded a level of contamination with finely dispersed particles above 500 micrograms per cubic meter. This is about the same as in Beijing’s well-known bad air quality in a very polluted day. The US Environmental Protection Agency and other agencies recorded pollution with small particles up to 990 micrograms per cubic meter – about 80 times higher than normal.

As houses, trees, grass and other materials burn, gases and particles are mixed, and carbon monoxide, carbon dioxide, carbons, nitrogen oxides, organic carbon and black carbon enter the atmosphere. Small particles (PM2.5), especially black carbon (soot), are very harmful, because they can easily enter the lungs and the bloodstream. Health research links them to respiratory diseases, heart problems and other ailments. In this case, fires that occur at a relatively low temperature and smolder on wet fuels are most likely to result in the formation of soot and other toxic contaminants. 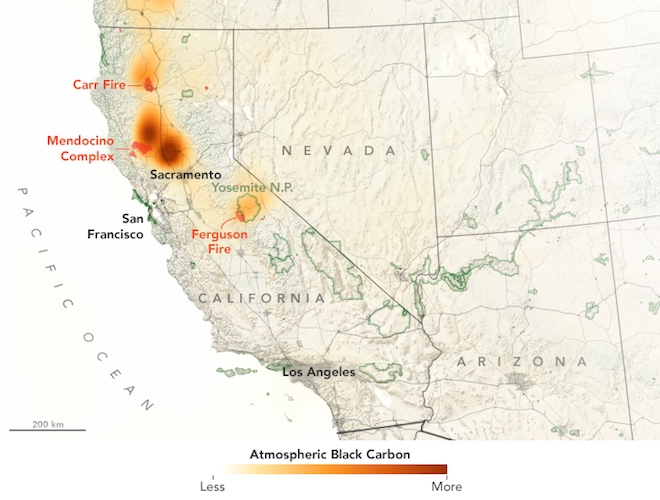 The map above shows emissions of soot, associated with the fires “Carr”, “Mendocino” and with a fire in Ferguson. According to the California Air Resources Board, forest fires are the main source of black carbon emissions in California, far exceeding emissions from vehicles, wood-burning stoves, industry and other sources. According to the US Forest Service, currently more than 50% of its budget goes to fighting forest fires, and the fire season is now 78 days longer than in the 1970s.