Over Vesuvius rose a giant “skull” 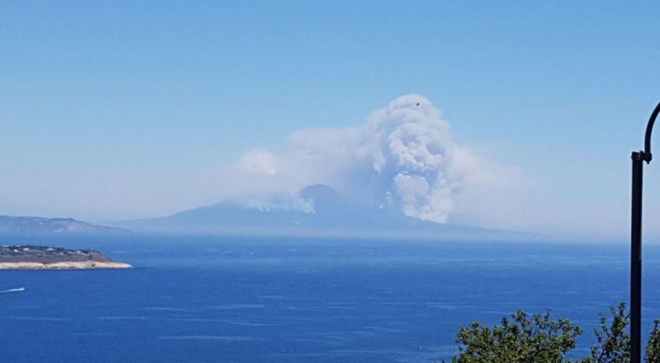 A giant skull appeared in the clouds of smoke that rose above the volcano Vesuvius. The reason for the smoke is natural fires in the vicinity of the volcano, which are said to have set the Italian mafia on fire.

The giant Italian volcano is famous for destroying the ancient city of Pompeii. Now, to his blood-chilling reputation, there was a cloud that looks like Woland de Mort from Harry Potter. Rosario Scotto Di Minico posted a delightful photo on Facebook and signed it: “Millennia later, the monster of Vesuvius was released again.”

About 50 families were evacuated from the vicinity of the volcano, which is located to the south of Naples. Firefighters and the military are working to ensure that the three fires do not unite.

In the emergence of fires blame the mafia. It is said that the Mafiosi set fire to cats and sent them to the dried undergrowth.

This strange and cruel tactic can cause fires over a large area. Because of her, it’s very difficult for the police to find out the origin of the fires.

The Minister of Ecology of Italy, Jan-Luca Galletti, said that there are too many fires on Vesuvius to be accidental.