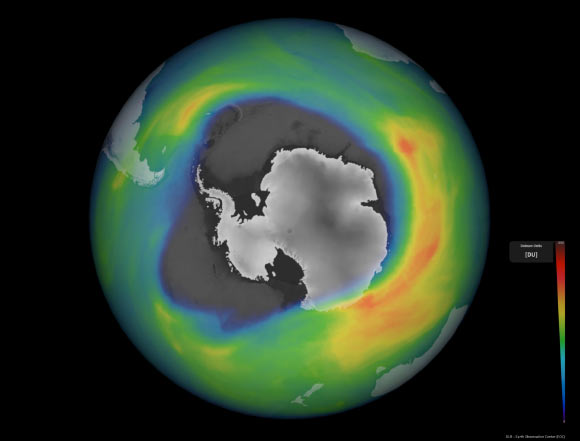 The ozone hole in Antarctica has reached its maximum size and according to new measurements, the hole in 2020 is one of the largest and deepest in recent years.

As you probably know, every year for the past several decades in the spring in the southern hemisphere, chemical reactions involving chlorine and bromine are causing rapid and severe ozone depletion in the southern polar region. This depleted region is known as the ozone hole.

The size of the ozone hole is constantly fluctuating. From August to October, it increases in size, reaching a maximum in the period from mid-September to mid-October.

When high temperatures in the stratosphere begin to rise, ozone depletion slows, the polar vortex weakens and finally breaks down, and ozone levels return to normal by the end of December.

New measurements from Copernicus Sentinel-5P show that on October 2, the ozone hole reached its maximum size of about 25 million km2 this year.

The animation below shows the size of the ozone hole from September 25, 2020 to October 18, 2020. Measurements from the Copernicus Sentinel-5P satellite show that the ozone hole over Antarctica this year is one of the largest in recent years. A detailed analysis by the German Aerospace Center shows that the hole has reached its maximum size.

“Our observations show that the 2020 ozone hole has grown rapidly since mid-August and encompasses much of the Antarctic continent — much above average in size,” said Dr. Diego Loyola, a researcher at the German Aerospace Center.

“It is also interesting to note that the 2020 ozone hole is also one of the deepest, with record low ozone values.”