Part of the tundra of Yamal became a desert 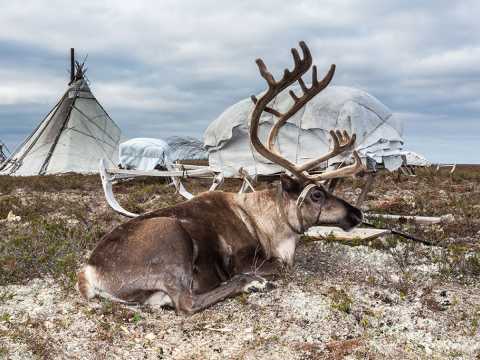 6% of the territory of the Yamal-Nenets Autonomous District turned into sandy areas – due to trampling by deer. There are almost no winter pastures on the peninsula, the number of green, shrubby deer feeds has decreased, because of which the weight of the reindeer has also decreased by half. Nevertheless, there are still a lot of them. If the number of these animals does not decrease, the area of ​​desertification of Yamal will grow steadily.

“Pastures can withstand only a certain number of animals, there is a special concept -” reindeer pasture “. If fifty years ago it was a figure of ten deer per hectare per day, then today only two – a decrease of five times. Overabundance of deer affected the vegetation cover, there are areas where it practically does not exist. Today, about 6% of the Yamal territory is clean sands, this is more than the territories that are alienated to the development of oil and gas fields, “the director of the Institute of Plant and Animal Ecology of the Urals Branch of the Russian Academy of Sciences, corresponding member Vladimir Bogdanov, told journalists.

The Institute of Plant and Animal Ecology of the UrB RAS conducts a geobotanical survey of deer pastures of the forest-tundra and southern tundra of the Yamal Peninsula. As a result, scientists hope to obtain a map of the maximum number of deer. Already today experts note that it will take at least fifty years to restore pastures.

In addition to the destruction of herbs, whose stocks have been halved in recent years, overgrazing of livestock could become one of the reasons for the spread of anthrax, for the first time in 85 years recorded in the summer of last year in the Far North. Then more than 2,5 thousand deer died, 97 people were hospitalized and one 12-year-old boy died.