Perhaps the largest gradients in the history of observations

Scientists have reported that the fragments of the hail that fell in 2018 may be the largest hailstones ever documented.

In 2018, a destructive supercell thunderstorm broke out over the town of Villa Carlos Paz in Argentina (such thunderstorms are considered the most powerful and dangerous). The riot of elements was accompanied by a strong hail that generously strewn the streets, forcing all pedestrians to hide in houses and under awnings.

From there, one of the videos was shot: during a hailfall, an incredibly large ice ball (from 11 seconds) loudly hits an asphalt. According to rough measurements, it reaches 23.7 centimeters in size, which makes it the largest hail particle in the history of meteorological observations.

However, since direct measurements were not carried out, and the scientists have only a video available, it is impossible to call this hail a champion with firm confidence. But Victoria Druett measured and captured another large hail during the same ill-fated thunderstorm: her sample is 18 centimeters.

Although it’s interesting to look at impressive ice shells from the side, such a hail is, of course, extremely dangerous, especially considering the tendency to increase its size.

“The hail can cause significant damage to property and agriculture, as well as cause injury or even death,” the researchers write in their article.

Scientists have proposed to officially classify gradients larger than 15 centimeters as “gigantic” (English “gargantuan” on behalf of the main character of the satirical novel Francois Rabelais, giant Gargantua). By this they hope to emphasize the destructive potential of such precipitation.

“Anything larger than a quarter (2.4 cm – approx. Ed.) Can leave a dent in your car, and 15-centimeter gradients sometimes pierced the roofs of houses. We would like to secure the lives and property of people and learn to predict such events, ”- Meteorologist Matthew Kumjan, University of Pennsylvania in the USA.

Hail is formed in supercooled clouds when moisture drops freeze and increase in size after other drops adhere and freeze. For the appearance of large hailstones, ascending streams are required that are strong enough to hold the “nuclei” of hailstones inside the cloud for some time before precipitation falls to the ground. “Spikes” gradients in the photo appear just due to overgrown new supercooled drops of moisture.

Such ascending streams, which increase with increasing height, are facilitated by warm and humid conditions, and the radar information obtained as a result of a study by scientists has proved that large gradients during a thunderstorm in 2018 fell near the place where the main ascending air stream passed. 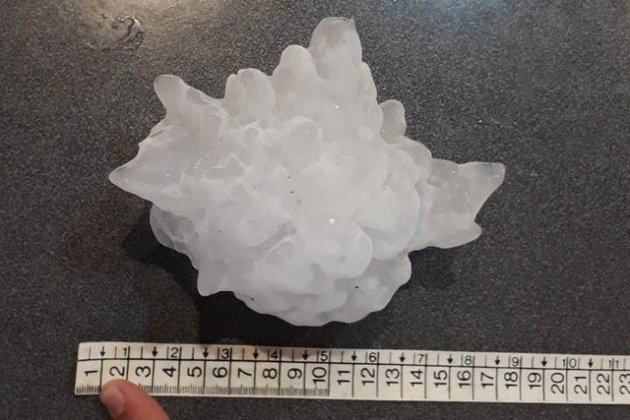 With the predicted increase in thunderstorms in the future, understanding the dynamics of where such precipitation may occur can be critical. Meteorologists predict a likely increase in hail particle sizes, which will increase as global temperature rises.

Pennsylvania meteorologist Rachel Gutierrez noted that volunteers can help scientists better understand the risks of such precipitation by reporting and providing accurate records of giant hailstones, including the time and place of their fall, as well as their weight.