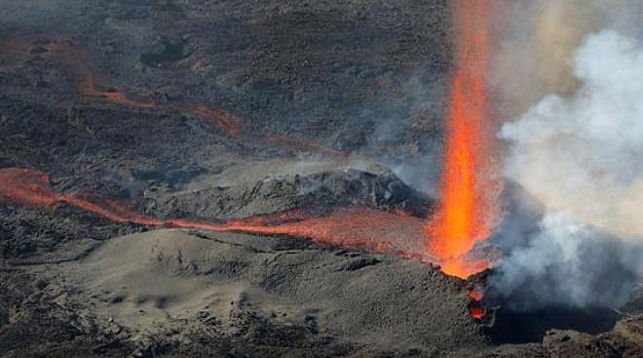 On the French island of Reunion – the second time in a month – the “Piton de la Fournezes” awakened, whose name can be translated as a “python from the heat.” The eruption of one of the world’s most active volcanoes began on Friday around midnight. The lava release was recorded on the southern, uninhabited slope.

This volcano is the main symbol of the unofficial flag of the island. The name “Piton de la Fournez” translates as “Peak Pech”, “Peak Ochag” or “Peak of the furnace”. Local residents do not stand on ceremony and call it simply – “Vulcan”.

“My husband is from Reunion,” says this resident of France, “and we come here at least once a year, but until now I have not been able to admire this spectacle … I’m certainly tired, but I’m ready to not sleep this night and the next too, if the eruption continues! ”

“As soon as we learned that the eruption began and that we can get closer, we did not hesitate for a second!” – adds this local resident .– “To see a volcano at night is real magic!”

According to the Piton de la Fournezes volcanological observatory, four outbreaks were recorded, one of which threw magma up to 30 meters high, its stream stretched for 300 meters.

The previous eruption occurred no later than April 3 on the northern slope of the volcano. Piton de la Fournez is located in the south-east of Reunion, its height is 2632 meters. Since the XVII century recorded more than 150 of its eruptions.