Pope of Rome – “This May is the last” 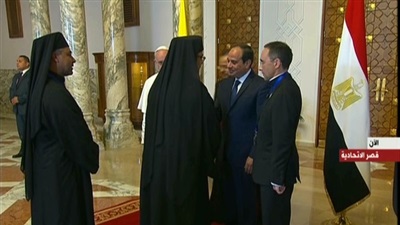 As the Egyptian television channel Sada El Balad reported, Pope Francis flew to Egypt. This arrival from the very beginning is accompanied by mysterious and enigmatic actions and words of the Pope.

He landed at the Cairo International Airport and went by car to the presidential palace to pay a courtesy visit to the head of state. After the meeting, President Al-Sisi and Pope Francis exchanged gifts. The Holy Father presented the President with a commemorative medal of his visit, which depicts the flight of the Holy Family to Egypt.

There is nothing mysterious and mysterious in this. If not for the words with which he gave this medal. According to our source, the journalists present were very surprised and intrigued by the words of the Pope. Although he did not say it very loudly, many people heard this mysterious phrase of the Pope: “We hope that after this year, in the future there will not be a new such medal.”

After this visit, the Pope went to the Sheikhdom headquarters of Al-Azhar in Cairo, where before the conference, he met with the High Imam Al Azhar Ahmed Al-Tayeb. An informal meeting took place on the sidelines of the World Forum for Peace, organized by Al-Azhar al-Sharif.

And then some journalists, who unwittingly witnessed this informal meeting, noted the second mysterious oddity. Usually the quiet Pope, something excitedly and quickly explained to the High Imam, so quickly that the interpreter barely had time to translate. The unwitting witnesses of this conversation noted that “Imam was gloomy before our eyes.” They also heard a few words from the excited tirade of the Pope: “this May … the last .. they want .. if .. they will do .. the apocalypse .. the end ..” And One phrase of Imam, who uttered rather loudly “You can not allow this.”

So, that this trip of the Pope to Egypt already gives a lot of information for contemplation conspiracy.

It should be noted that a few days ago, Pope Francis issued a covert appeal-warning to leaders, in his video from the Vatican. This video was shown on Tuesday at the international conference Ted in Vancouver.

As eyewitnesses present at the same time, the video made a big impact on the audience. Everyone felt that the Pope’s words had a hidden meaning. That these are not just words, but appeal to a certain circle of people whom the Pope wants to warn about something in categorical form.

“Please let me say it loud and clear,” he began. “The more you are powerful, the more your actions will affect people and the more humbly you have to act. If you do not, your strength will destroy you, and you will destroy others. ”

Conspirologists attracted experts of Masonic symbolism who understand at least partially concealed gestures of representatives of secret societies, the sign and digital coding of the important events that they announces.

In detail in this video they understood everything – since the pontiff had hands, accentuating those or other moments of speech and ending with a careful study of the roots of books, as if “accidentally” placed with the Pope behind him.

Naturally, completely all that was said in this address, Francis can be understood only by those for whom the hidden message was intended, but how much he was able to interpret the experts drawn for analysis – the Pope, addressing a certain circle of persons, threatens them with a public disclosure of some monstrous truth.

It is specifically about what will be disclosed Francis does not even hint at all – contextually it is assumed that the recipients of information know what is at stake. But what is clear from the appeal is that the Pope does not express his personal opinion, but rather speaks on behalf of a certain group of very influential people who shares his position.

I have a sneaking feeling the entire Catholic Church is about to be betrayed by its own leader.