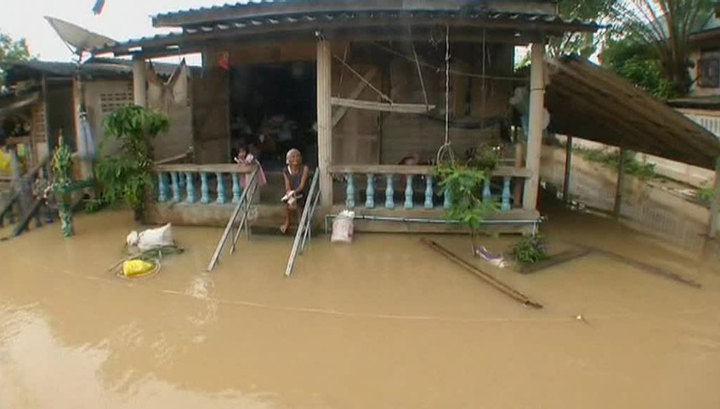 In Thailand collect aid for the flood victims. In total, the disaster affected more than a million inhabitants. Under the water were more than four thousand settlements. 19 people were killed. Usually the new year period in Thailand, Sunny and dry. But this time the South of the Kingdom filled week in a row.

Monsoon rains turned into a disaster area 10 Thai provinces, drove from flooded houses nearly a million people. There is documented evidence of two dozen victims, but victims may be much higher.

Communication in some cities is completely broken. The only reasonable way of moving through the streets – boats and rafts. Mobilized to help the victims, the army and emergency services trafficked people in the evacuation centers, and those who can’t take on helicopters deliver food and drinking water. The situation is under personal control of the Prime Minister of the country, but it is obvious that against the disaster – the authorities are powerless and blame their predecessors.

It is difficult to protect yourself from flooding due to the fact that all the projects of previous governments were not planned properly, not enough channels to divert water into the ocean, not enough gateways and pumps and observation towers, — said the Prime Minister of Thailand prayut Chan-Loci.

In such a situation most people have to rely on themselves and on the weather, which, at least ceased to deteriorate.

We don’t have enough food and drink, but now the water level has stabilized, said one of the victims.

The Thai economy under the double blow – flooded farms and on the verge of collapse – the winter tourist season. Monsoon rains flood the popular resort Islands of Samui and Phangan, on the main territory of the country – hundreds of delayed flights, endless interruptions in rail and bus connections. But some foreigners continue to get pleasure from the surroundings, even when the situation seems worse than ever. Flooded streets of Thai cities these days have become an additional tourist attraction.