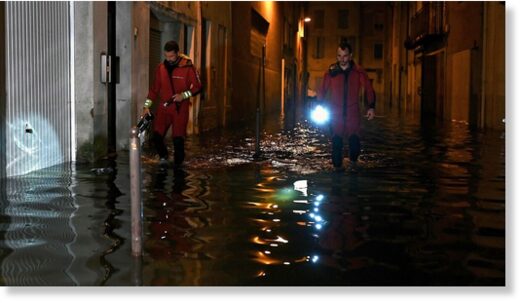 Streets in the city of Agen were flooded to a depth of more than 2 meters, according to city authorities. About 70 firefighters were dispatched to the area and crews responded to about 130 incidents, mostly flooded basements or buildings. No injuries or fatalities were reported. Local authorities opened an evacuation center at City Hall. According to local media reports, firefighters rescued about 20 people.

The nearby neighborhoods of Boe, Nerak and Marmande were also affected, and several roads in the area were closed. In Boe, part of the roof of a supermarket collapsed under the weight of the rain.

Areas in the Department of Aude also received heavy rainfall. Roads were flooded in Lézignan-Corbières. According to Météo France, several areas received more than 40 mm of rain in 1 hour. In Cones-Minervois, 57.6 mm of rain fell in one hour, equivalent to a month’s worth of precipitation.