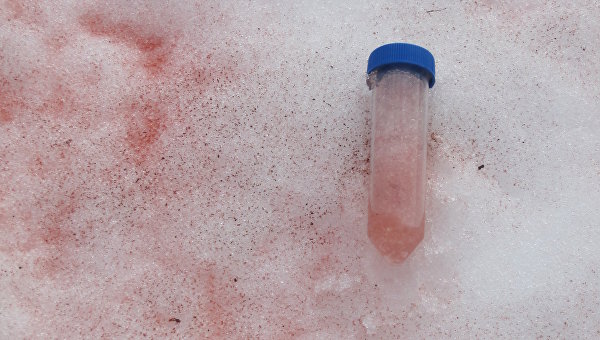 Red algae are able to grow inside the column and on the surface of the ice, was one of the main factors in the phenomenal speed of ice melting in recent years, say German climate scientists.

“Our research shows that bio-albedo is an important climate-the thing that should be taken into account in subsequent climate projections,” said Stefanie Lutz (Stefanie Lutz) from the Helmholtz Centre in Potsdam (Germany).

Lutz and her colleagues watched the relatively new Arctic phenomenon, which scientists, including Russian explorers began to notice in the early 2000s – flowering ice and snow. Under certain conditions, such as relatively high temperature, a single-celled algae found in waters of the Arctic ocean and often fall with them on the surface of Arctic glaciers begin to actively proliferate, when the snow and ice has thawed.

The result of this multiplication is that the ice and snow lose their usual white and painted in red or brown color. The main result of this from the point of view of climate science is that the ability of ice to reflect light decreases significantly due to which they begin to absorb more heat and melt faster.

As Lutz says, till now scientists knew about this effect but haven’t tried to accurately measure his strength. Her research group attempted to correct this defect, having made the expedition to the shores of Greenland, Iceland and Svalbard where scientists took samples of water and snow in a glacier 21 the Arctic.

The study of these samples gave two unexpected results – it turned out that red algae, causing flowering was a kind of “cosmopolitan”, and that potential has been underestimated several times.

“Cosmopolitanism” of algae was evident that the same microscopic flora lived in all parts of the Arctic, which called for German scientists. This means that the algae bloom will eventually affect all of the territory North of the Arctic circle. 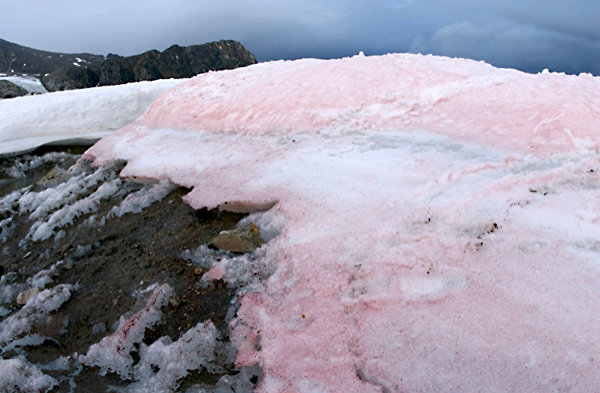 This is important in the context of the fact that the algae bloom was more dangerous for the climate than thought, scientists – the authors of the article, only one episode of the algal bloom reduces the albedo of the ice is 13%, which significantly accelerates their melting.

The situation is aggravated by the fact that this process is, in fact, a “chain reaction” with positive feedback – increased thawing of glaciers even more accelerates the growth of algae, which in turn makes the ice and snow darker, and the circle starts again. All of this suggests that this phenomenon should be taken into account in the forecasts for the further development of global warming, conclude the Lutz and her colleagues.