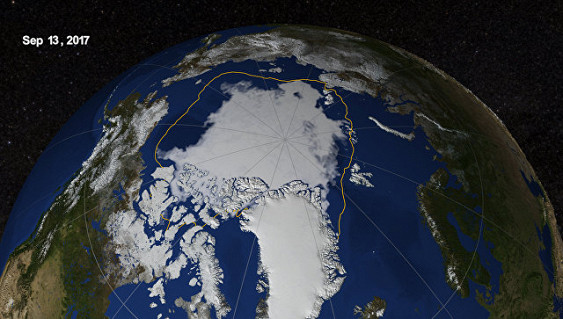 The shrinking ice area in the Arctic during the summer for the fourth year has reached record values ​​for the entire history of observations of the state of the northern polar cap – 4.6 million square kilometers, which is almost 1.6 million below the average for the past 20 years, NASA reports.

“The way the ice cap of the Arctic is shrinking in summer depends not only on summer temperatures, but also on the condition of the ice in winter.” The summer of this year was absolutely unremarkable in terms of the climate, the fact that we all recorded a record low summer ice area , says that today the ice is in a much worse state than it was 38 years ago, “said Claire Parkinson, a leading climatologist at NASA’s Goddard Space Flight Center (USA).

As Parkinson notes, this year was not the highest record in the past four years – the record for the maximum reduction in ice area still belongs to 2012, when the size of the polar ice cap was reduced to 3.41 million square kilometers. Nevertheless, the summer of 2017 entered the top ten in the rate of shrinking Arctic ice in the entire history of observations.
On the other hand, the scientist explains, this reduction is still very disturbing, since this year, unlike the previous three record-breaking summer seasons, the Arctic did not experience any weather anomalies that could temporarily increase the process of melting ice.

In addition, NASA experts do not rule out the likelihood and the fact that the ice area will continue to decline in September due to sudden changes in the direction of the winds.

The reason for the reduction in ice area this year, according to researchers, could be strong summer rains in the Arctic, whose relatively warm waters could accelerate the melting of the ice cap. This became possible due to the fact that the average thickness of ice in the Arctic has significantly decreased in recent years, which made the polar cap more vulnerable to the effects of various weather events.

Similar processes, as noted by Parkinson, are also taking place today in the Antarctic, where winter reigns now and the polar cap is gradually growing. Its growth, as scientists expect, will stop at extremely low values, which will continue the series of “records”, launched in 2015. If we consider the ice of the Arctic and Antarctic together, then, according to the climatologist, all eight last months of 2017 set new records in the speed of polar caps.