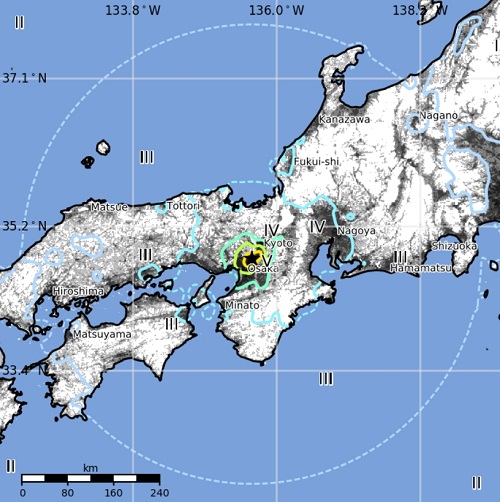 Previous studies have shown elevated levels of radon in the atmosphere prior to the main shock from a massive earthquake on land. However, in a new study, researchers found an anomaly in this phenomenon as they found that the concentration of the radioactive element had decreased.

“This is the first time we have detected a decrease in atmospheric radon associated with a seismic calm before the main earthquake shock on land,” said lead author Jun Muto, professor at the Graduate School of Life Sciences at Tohoku University.

Analyzing data before and after the 2018 North Osaka earthquake, the researchers found that the concentration of radon in the atmosphere had decreased. About a year before the earthquake, there was a decline – a trend that continued until June 2020.

Seismic activity in the vicinity of the monitoring area also decreased before the earthquake, along with a decrease in seismic activity after the main shock for the entire Kansai region, excluding the aftershock areas.

All observations show that radon levels did not increase after the earthquake and created a more complex picture of the movement of radon. Earthquakes can cause radon to escape from the ground in strong tremors.

“The discovery showed that there are more processes going on before earthquakes than previously thought,” Muto said.

“Further analysis of other earthquakes will lead to a better understanding of the physical and chemical processes at work and will help us use the concentration of radon in the atmosphere to understand the various movements of the earth’s crust associated with large earthquakes.”

The group has set up monitoring networks to measure atmospheric radon concentrations throughout Japan. Expanding the network will help clarify the area and timing of anomalies, the geological attributes causing such anomalies, and the relationship with different types of earthquakes. This will ultimately help in a radon based earthquake prediction system.