Residents of the Arctic are at risk due to warming 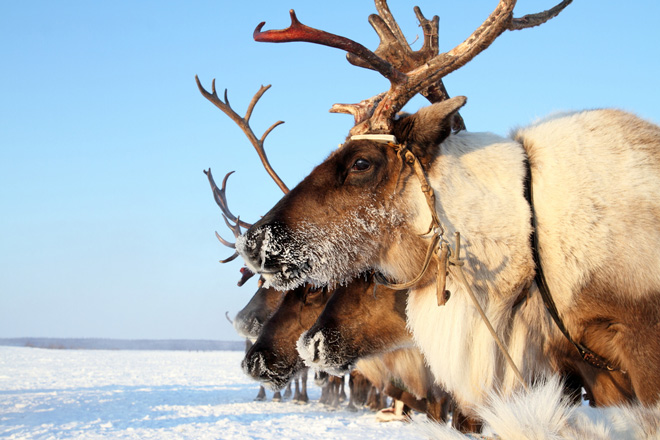 The winter temperature in Norway’s Lapland can increase dramatically in the current century, which threatens the devastating consequences for the reindeer and the indigenous Sami people, whose life is inextricably linked with reindeer herding.

The endless tundra, the Finnmark mountain plateau in the far north of Norway, is already subject to a temperature rise that destroys the centuries-old Sami way of life.

“We are experiencing the effects of global warming, losing more and more deer every year due to climate change,” says reindeer herder Per Haup.

The local continental climate with cold and dry winters gradually becomes similar to coastal regions with a more moderate temperature and more precipitation. The changes affect the conditions of grazing of 146,000 domesticated reindeers in the region that feed on lichens and moss growing under snow.

When a lot of snow falls and the cover becomes too hard, the animals can not get to the food and die. Especially this applies to young individuals at the bottom of the hierarchy.

One of the Sami dialects has at least 318 words to describe the different types of snow. For example, seanas means a kind of grainy snow, ideally suited for reindeer, as it allows you to easily dig out mosses and lichens.

But for such snow you need a strong cold. If before the temperature in Kautokeino, the main reindeer breeding center of Norway, regularly dropped to minus 40 ° C and lasted for several weeks, now it reaches such marks rarely and briefly.

Today’s conditions are just a tasting of the coming changes. By the end of the century, winter in Finnmark will be warmer by 7-8 ° C, warns Rasmus Benestad, a specialist at the Norwegian Meteorological Institute.

The problem for reindeer is currently the alternation of periods of thaw and freezing, creating thick layers of ice that are not crushed by hoofs.

When deer do not get access to lichen and moss on those pastures, where they are brought, they are looking for others. This can cause conflicts between shepherds occupying different lands and demand from them burdensome and difficult work to supply animals with food.

The changing climate also makes it difficult to move the herd twice yearly, when the shepherds drive deer from summer pastures along the coast to winter pastures in the mountains of Finnmark, and then back.

Due to a longer autumn, ice increasingly becomes thin and unpredictable. When crossing waterways, it may fall under the weight of an animal, and sometimes a shepherd. “It’s getting worse and worse,” the shepherd notices with alarm. – Last year I lost at least 12 deer on the ice crossing. I could not get them out. ”

In November 2009, almost 300 animals from one herd were drowned in a river in neighboring Sweden.

The Arctic is too hospitable

“Deer always lived in a climate of unstable climate and learned to adapt to nature,” says Anders Oskal, director of the International Center for Reindeer Husbandry. “Our main concern is that the Arctic is becoming more accessible, since warming leads to increased human activity.”

Geological exploration, development of mining and wind energy, and the construction of roads and recreational huts – all this affects the Sami heritage, encroaching on their pastures. “A deer can be a semi-domesticated animal, but it will always try to stay away from anything that is connected with a person,” says Oskal.

Mathis Andreas, a 47-year-old shepherd, is concerned about the Canadian mining company’s interest in land near its pastures. “We can not welcome with open arms the people who come and deprive us of our means of subsistence, destroy our way of life, our lands – that belonged to us from generation to generation, hundreds, if not thousands of years.”