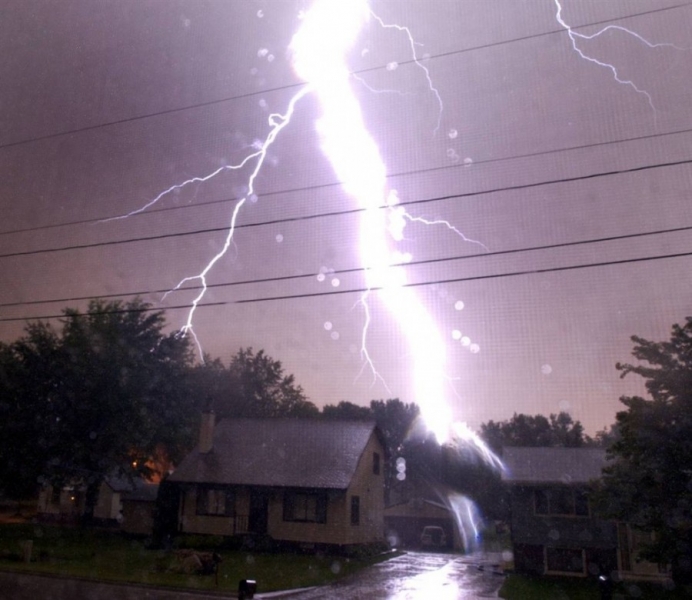 The lightning are a threat to all living things. If lightning hits the chest of a person, then there is an immediate cardiac arrest, and immediately death occurs. Also a very small chance to survive when lightning strikes in the head. If the electrical discharge affects the hands or feet, a person receives severe burns. Almost always after a lightning strike left on the body of the victim ornate drawings, reminiscent of the very lightning.

It is still unclear why the lightning strikes in one person, which is surrounded by hundreds of people. All attempts of scientists to identify some algorithm such behavior of the elements in what have not resulted. A strange case occurred in Japan. The students together with the teacher went Hiking. Not to be lost, they came from a single rope, which suddenly was struck by lightning. Children died in one even died, odd survived.

American Roy Sullivan got into the Guinness Book of records due to the fact that it was seven times hit by lightning. This despite the fact that in the US, according to statistics, the probability of hitting of a person by lightning in a lifetime is 1 in 3000. Each time, men managed to survive. In later years, people avoided Sullivan for fear of being struck by lightning along with it.

In the end, he committed suicide for unclear reasons. After his funeral in the graveyard a storm. Lightning hit the grave and Sullivan split in half a headstone. Witnesses joked that it was a “control shot”.

Another famous victim of lightning became a resident of Bulgaria March Maikia. However electric discharges that wasn’t very Martha, and her husbands. Her first husband lightning struck two months after the wedding, the second element has overtaken during the honeymoon.

After the death of her second husband, the woman was in great stress and went to Germany for treatment. Of depression Marta brought the German doctor-psychotherapist, with whom she developed a romantic relationship. Young decided to get married. Martha went to Bulgaria, soon after it went the groom. However, the way the man was caught in a thunderstorm, lightning struck the roof of the car and struck a fatal blow to the doctor. After this incident, Martha decided to get married.

Englishman Darren Milne, along with his wife walked through the National Park and Bryce Canyon in Utah. Suddenly a strong wind blew and went to the castle. The Englishman heard a strong crunch and lost consciousness. Woke up from the screams of his wife. “His clothes were torn, shoes were lying a few metres away from him… there was blood, there was a smell of burning flesh and hair were completely burned,” — recalled later spouse.

It turned out that the head of Milne was struck by lightning. Through all of his body, the lightning went into the ground, leaving the skin men of the terrible scars. However, he managed to survive that has put doctors in a deadlock. According to doctors, the person is not able to handle such discharges. Thus experts do not exclude that Milne can open psychic abilities.

Although such cases seem to be amazing, but they are in the practice of doctors. Researchers cite the examples that in one patient after a lightning strike melted the coins in his pants pocket, turned into copper kom, the other melted gold tooth, a third boiled pot, enveloping it with the cloud of steam. But they all survived. Often after such cases, people start acting strangely.

“One of my patients after the impact acted like a two year old child. The loss of short term memory, he had to write it all down,” recalled Dr. Handler from the USA. Some do acquire a remarkable ability. For example, a widely known fact, as a Pakistani farmer Muhammad Naftule after being struck by lightning and began to speak in fluent Japanese. It even suspected that he is a Japanese spy. However, it later emerged that the farmer is illiterate, never been to Japan and studied the language.

Scientists see the appearance of such abilities for several reasons. On one of them, an electric discharge can affect the dormant centers of the brain, awakening their potential and discovering people with new opportunities. According to another theory, supernatural powers already inherent in some people from birth, and zip “choose” that those people who have some gift.

However, the lightning, and the potential of the human brain is very poorly understood by specialists. Therefore, scientists suggest in any case not to experiment with lighting and try not to get caught under their blow specifically for the purpose of receiving abilities. Best of all during a lightning storm not to be in an open area and observe elementary safety rules.