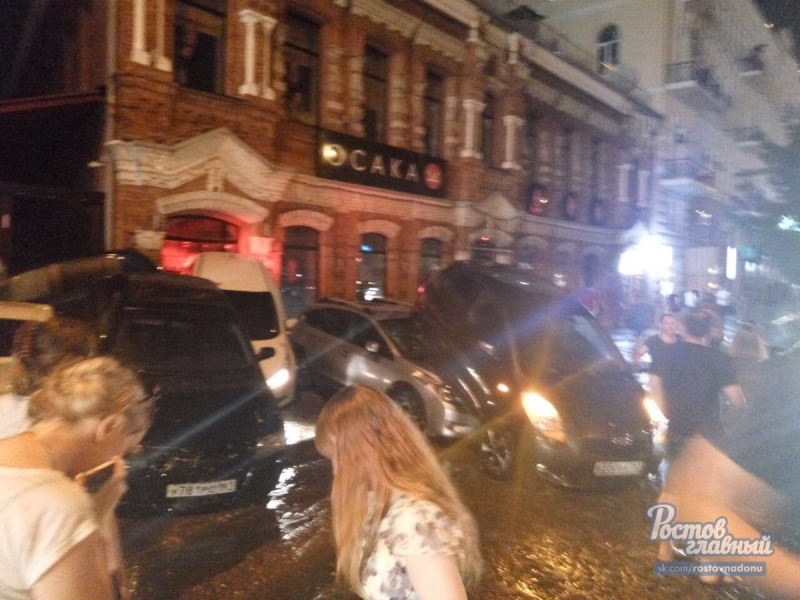 A powerful rainstorm with hail and strong winds struck on Thursday in Rostov-on-don. Roads in the city turned into a mountain river. Dozens of cars drowned and was damaged. Many people are unable to get home. The storm knocked down trees. There are reports of two dead.

Due to heavy rainfall in Rostov-na-Donu began flooding. According to local media, the Rostov streets literally turned into rivers. Flooded virtually all major highways. Eyewitnesses write that at the intersection of Suvorov–Sokolov stream of water was such that knocked people off their feet. The water began to penetrate into the premises where from the elements sheltering pedestrians are cafes, shops, entrances of houses. The rain flooded the Rostov McDonald’s on the Big Garden and the main bus station.

Dozens of cars were drowned and damaged. For example on Budennovsky Avenue, the flow of water dragged the car and beat them against each other, so that there are machines formed just a pile of scrap metal.

Passers-by were forced to get home on a belt or even chest in water. Rostov wrote in social networks that in some areas of the city now turned off the water, no electricity.

Eyewitnesses reported also that two people could die in this chaos. The city authorities are now checking this information. A spokesman for PG interior Ministry in Rostov region Natalia Ustimenko confirmed yet, “Interfax” the death of a girl on Budennovsky Avenue. The flow of water dragged her under her car, was trying to help passers-by, but could not.