Rostov oblast comes after a series of tornadoes 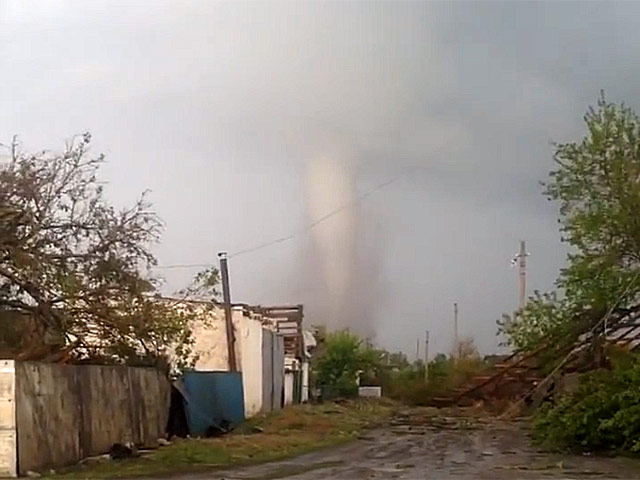 In the Rostov region of squally winds and heavy rains spawned atypical for Russia weather phenomenon – a tornado rips off roofs of houses and left hundreds of households without electricity. The element that MOE called “the Complex of the Adverse Meteorological Phenomena”, destroyed the house in the Khutor Il’inskiy Belokalitvensky Raion and in three villages.

The elements covered Belokalitvinsky district yesterday. The website Volgodonsk VDNews reports that in the area of hurricane and tornadoes, which were visible from different parts of the city. Four settlements were left without electricity, one partially demolished the roof of the administration building. The entire roof has lost more than a hundred houses in the villages Ilyinka, Kalynivka, Expanse and annovka. Dozens of fallen trees, several transmission towers, broken glass. No casualties were reported.

On the territory of Ilinsky rural settlement within the boundaries of the 3 settlements entered emergency mode, reports of EMERCOM in the region. To the affected areas organized water supply.

“The notebook of Volgodonsk informs that on Sunday, the element continues to rage: in the area Tsimlyanskaya hydroelectric power station and two gardens there was a heavy rain with hail. Wind has tumbled down trees, in Volgodonsk, some fell on parked cars and blocked the roadway.

In the Rostov region liquidate the consequences of the recent hurricane. According to the information of EMERCOM of Russia, the supply of electricity is restored, the work to repair damaged power lines completed. Local authorities promise to pay compensations to aggrieved parties. The disaster has left without light a half thousand people.

Emergency mode is entered on the territory of several settlements Ilinsky rural settlement of the Rostov region in connection with the hurricane that devastated the region on may 14. As a result of strong squally winds and hail were left without light more than 500 houses, inhabited by about 1500 people. Damaged roofs of more than 100 buildings, fallen trees, collapsed dozens of power pylons. “First grad went the size of a walnut, then a fist. And beat all. It was terrible. Not even scary — creepy. Everything was rattling, everything was flying all over,” says an elderly local resident.

In illinka set up operational headquarters EMERCOM rescuers help to repair damaged roofs. The head of the Main Department of EMERCOM of Russia in the Rostov region Valery Sinkov said: “In the framework of the tasks during the execution of an emergency at night did a little regrouping, replace people performing tasks at night, and today this group is 70 people and 15 vehicles. This applies to those who directly performs tasks related to the provision of assistance to liquidation of consequences”.

Now energy restore power lines. The authorities of the region noted, that all necessary assistance will be provided to the population, is preparing a decree on the payment of compensation. “Surveyed all 110 households, compiled acts. Today we are talking about payment to the people affected by natural disasters, one-time financial assistance”, — said the Deputy Governor of the Rostov region Vadim Artemov.

The locals are in no hurry with the repair of their houses in the coming days in the region are forecasted precipitation.