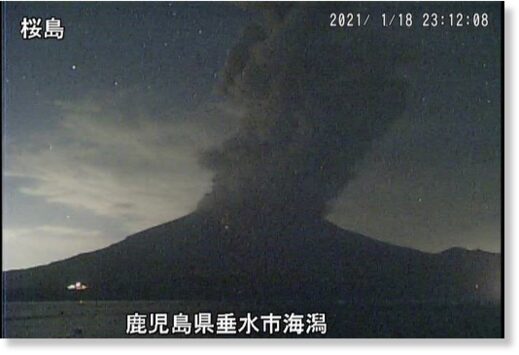 The explosive activity of the volcano continues. CCTV cameras recorded a volcanic explosion in the Minamidake crater with the formation of an ash plume, which reached approximately 2100 m in height and drifted to the southeast.

The eruption, which began yesterday at about 23:09 local time, threw out luminous lava bombs at a distance of 600-900 m from the crater. The explosion was also accompanied by volcanic lightning at the beginning of the event.

The visible glow and near-constant outbursts of gas suggest an ongoing rise of fresh magma within the volcano’s channels.

The seismic station recorded 24 volcanotectonic earthquakes from 15 to 18 January.

The warning bulletin says that ballistic strikes from volcanic bombs and pyroclastic flows could affect an area about 2 km from the main crater.