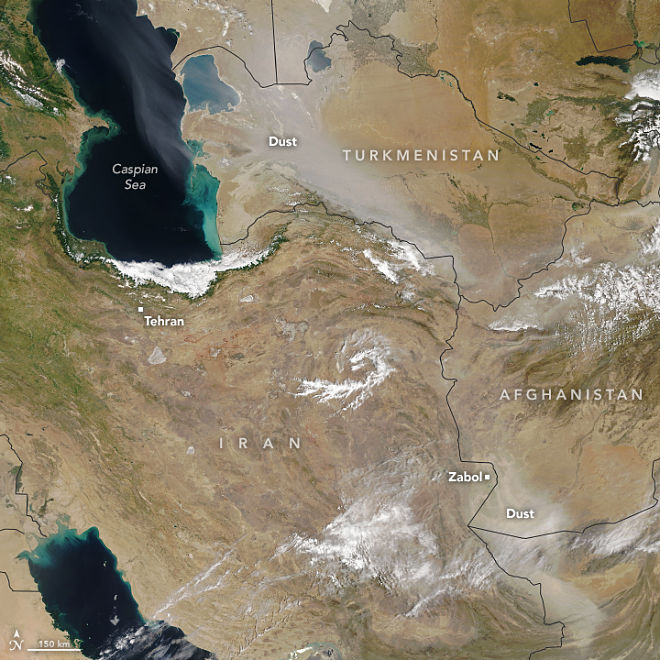 On May 28, 2018, a series of powerful sandstorms rained down on Iran, Turkmenistan, Afghanistan and Pakistan. In the east of Iran near the city of Zabol wind speed reached 110 kilometers per hour. Visibility fell to zero, storms in some areas lasted up to 12 hours. According to the media, around 100 people were affected around the region.

On May 28, using the MODIS tool on the NASA satellite, Terra managed to get this image. Habuba (powerful sand and dust storms) are associated with weather fronts, they often appear as moving walls of sand and dust. Like thunderstorms, habubs tend to start abruptly and quickly end. Meteorologists noted that dust storms in late May were caused by a storm system that moved north of the region and brought thunderstorms to Turkmenistan and northern Afghanistan, as well as powerful winds to the east of Iran. The surface temperature of the sea in the Arabian Sea in May was about 1.5-2 degrees above normal, which could contribute to the development of strong winds and thunderstorm fronts in the Middle East and India this spring.

The climate of Iran is mostly arid or semi-arid, the deserts on its territory occupy not less than 25 million hectares. This already dry landscape last year was literally burned out by drought. Iranian environmental authorities recently reported that in recent months 18 wetlands have completely dried out, and another 24 are in critical condition. Over the past few decades, Lake Urmia has suffered from warmer weather and drier than usual conditions. Such conditions, in turn, led to the fact that the amount of sand and dust that could be picked up by the wind increased.

Several governments and international groups are looking for solutions to water and dust problems in the region, which are partly caused by drought and global warming, but also, according to some scientists, are the result of inadequate management of water resources (irrigation, storage, processing and pumping of groundwater). Meanwhile, the Iranian government recently reported that this year 46,000 hectares of desert will be covered with oil-based mulches to reduce dust pollution.