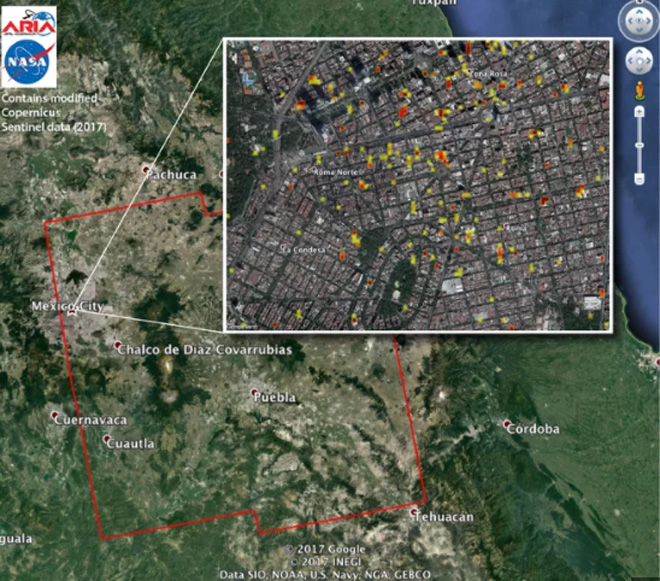 A new map, compiled with satellite images, will help Mexico more efficiently eliminate the effects of a powerful earthquake near the city of San Juan Raboizo. During the seismic event, which occurred on Tuesday, September 19, hundreds of people were killed and a huge number of buildings collapsed.

An earthquake of magnitude 7.1 hit about 120 km southeast of Mexico City. Scientists of the California Institute of Technology and the Jet Propulsion Laboratory of NASA have created a damage map using radar images of central Mexico made by the satellites of the European Space Agency “Sentinel-1A” and “Sentinel-1B” before and after the earthquake.

“Species include the scale of damage caused by the earthquake and subsequent aftershocks. They are based on changes in the surface of the earth, which revealed a radar, “- write NASA representatives in a statement. “Variations of color from yellow to red indicate more and more significant changes in the surface of the earth and buildings,” they add. – The map can be used as a guide to find affected areas. For vegetation-covered areas, it is less reliable. ”
NASA provided a map to the Mexican authorities. The full resolution version is available here.

“Sentinel-1A” and “Sentinel-1B” are not the only satellites that followed Mexico after the earthquake. The WorldWeight-2 satellite, which is operated by the Digital Globe company, filmed its own views on Wednesday, September 20: Digital Digest published pictures before and after the earthquake to rescue and recovery operations. The California Institute of Technology and the NASA Jet Propulsion Laboratory also created a damage map after an 8.1 magnitude earthquake shook the Pacific coast of southern Mexico on September 7.