A new study by Italian geochemists indicates that raising the soil in the area of the Caldera of Campi Flegrei is due to the gas pressure, not because of the surge of magma as previously thought. This information was presented at the conference “Goldschmidt” in Yokohama (Japan) at the end of June 2016.

The Caldera of Campi Flegrei (or Phlegraean fields), located in the Bay of Naples near mount Vesuvius, is one of the most dangerous volcanoes on Earth. About 40 000 years ago it produced the eruption index of VEI-7 to 8-point scale explosion, and the last time was slightly erupted in 1538. 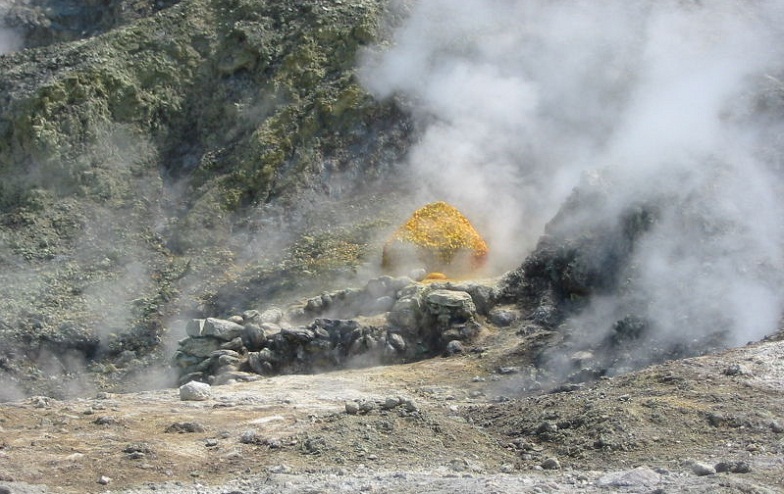 Due to the geological instability of the soil in the area of the volcano can rise and fall by several meters in just a few years. The last time a similar event was observed in 1982-1984, when the surface of the Caldera rose to a height of 1.8 meters. Most scientists believed that the deformation is associated with a mixed magmatic and hydrothermal activity, however, recent research geochemists from the Second University of Naples attests to the involvement of volcanic gases.

As reported by Professor Roberto Moretti (lead author of the study), during its work, the specialists analyzed the geochemical data of the Caldera over the last 30 years and came to the conclusion that the lifting of the soil is not due to the migration of magma and hydrothermal activity supported by the deep magmatic gases.

On the one hand, this is good news, as in this case, the probability of an eruption can be reduced somewhat. On the other hand, the transition from hydrothermal to magmatic activity is able to occur with any time, that is, experts can’t say that Campi-Flegrei all is well. The Caldera remains an unpredictable place, carrying a threat not only to Italy but all of Europe.

Scientists believe that the new interpretation of the activities of the volcano requires direct access to the underground area, but in the scientific world still debates concerning the safety of drilling in the Caldera. Commenting on the present study, Professor Jon Blundy from Bristol University claims that the hot gases and magma are Prime candidates for the cause of the deformation of the soil, but have completely different implications for future volcanic activity. “Moretti gives convincing arguments in favor of gas that can be used at other restless volcanoes” – said the scientist.