Scientists have uncovered the unusual role of volcanoes in climate change 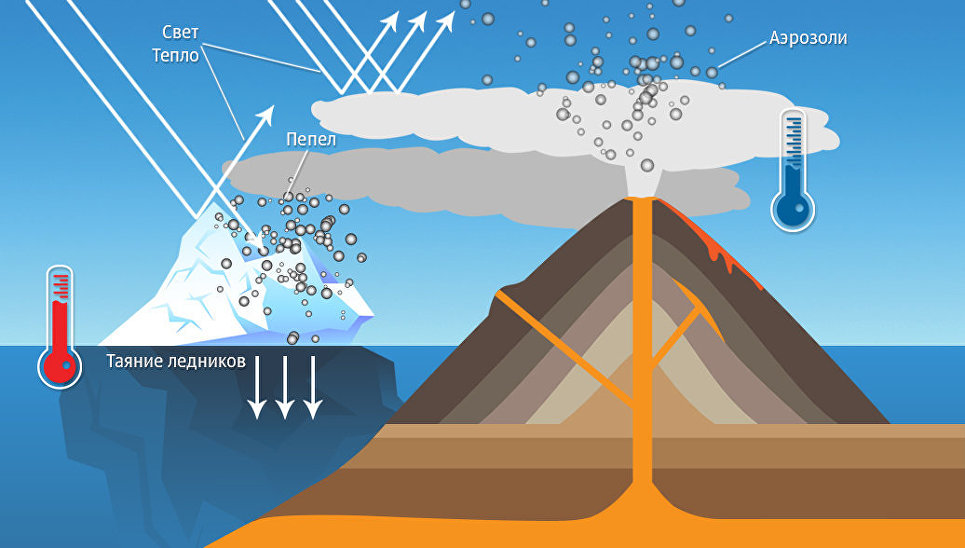 Volcanic eruptions not only cool the planet, throwing into the air a huge amount of aerosols, but also make glaciers melt faster due to the huge mass of ash emitted during these same disasters, according to an article published in the journal Nature Communications.

“We all know that dark snow and ice melt faster than their white counterparts, it’s all very simple and obvious thing, even for a child.” But on the other hand, no one has ever been able to show that volcanic outbursts and episodes of rapid melting of ice in past were linked, “said Francesco Muschitiello of the University of Colombia, USA.

Muskitello and his colleagues found that volcanoes do not always uniquely affect the climate, while simultaneously causing the melting of ice, and the “volcanic winter”, studying the sedimentation of mud, formed at the bottom of a dried-up Baltic glacial lake. It was a large temporary reservoir that covered a significant part of modern Scandinavia in the glacial epoch in the summer, when meltwater from the glaciers began to flow into the basin of the future Baltic Sea.

This lake, according to current estimates of geologists, arose about 12 thousand years ago, during the flight of the glacial period. and it lasted several thousand years, accumulating volcanic ash, pollen and other pieces of organic matter that could tell a lot about the climate of the era during which they arose.

Climatologists in this case were interested not in the content, but in the appearance of its bottom sediments. Their thickness, as the researchers explain, is a kind of analogue to the annual rings of trees – the wider each layer of silt, the more water should flow into the lake from the slopes of receding glaciers.

This feature of the bottom of the Baltic Lake helped scientists understand the role played by volcanoes in its formation and filling, comparing the changes in the thickness of the silt layers with what “volcanic” substances were found inside the ice deposits formed in Greenland in the same era.

This comparison, contrary to the expectations of scientists, showed a rather strange picture. At the time of volcanic eruptions that threw out a large amount of aerosols into the atmosphere, the rate of glacial melting did not fall, but grew or remained the same, despite the fact that similar emissions lowered the average temperature by 3.5 degrees Celsius throughout Scandinavia.

According to the authors of the article, the reason for this anomalous behavior of glaciers was volcanic ash – even small amounts of it, according to climatologists, could reduce the reflectivity of ice by 15-20%, which would significantly increase the warming of the glaciers by the light and heat of the Sun and accelerated their melting.

One of such eruptions, scientists suppose, could sharply accelerate the rate of water accumulation in the Baltic lake, which led to the formation of a channel between the world’s oceans and this reservoir and the birth of the Baltic Sea.

All this, according to Muskitello, indicates that volcanoes could play a much larger role in the end of the ice age than scientists now believe, and that their emissions do not affect the climate as unambiguously as previously thought.