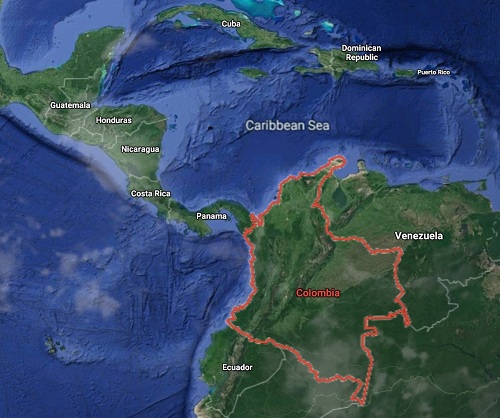 Today we wrote that yesterday, April 22, 2021, south of Cartagena, all seismic stations showed a powerful earthquake with a magnitude of 7.2 on the Richter scale, but this data was quickly deleted everywhere. We managed to find a recent scientific study dated April 19, 2021, which talks about the likelihood of tremors of magnitude up to 8 points just south of Cartagena, off the coast of Colombia.

Yesterday’s earthquake happened exactly where it was predicted by scientists. It remains to be understood why the fact of a powerful earthquake was deliberately hidden from the public.

Here’s what the scientists write:

GPS network data has identified a shallow and completely enclosed subduction zone in the Caribbean Sea in Colombia, indicating a possible large earthquake and tsunami hazard in the northwest region of the country.

Columbia is located at the center of a complex tectonic zone where the tectonic plates of the Caribbean, Nazca and South America converge, as well as other smaller tectonic blocks.

The Caribbean Plate converges very slowly with the northern region of Colombia at 7 mm (0.3 in) each year, which could be the reason for the long time between large earthquakes in the northwest.

Lead author Cindy Lizarazo of the University of Nagoya in Japan, who presented the study at the Seismological Society of America (SSA) Annual Meeting in 2021, said the locked area south of Cartagena could generate an 8.0 magnitude earthquake every 600 years.

“The only recent historical record of a devastating [M6.4] earthquake in the Caribbean region of Columbia was on May 22, 1834, near Santa Marta,” she said.

“However, there is not a single seismic event that matches the magnitude estimated by our study, nor a tsunami in the historical records in northern Colombia.” (Yesterday such an event took place in this particular area, but it was deliberately hidden!)

To better understand the deformation of the earth’s crust and the complex movements taking place in the region, Lizarazo and her colleagues studied data from the GeoRED GPS network, which has been operated by the Geological Survey of Colombia since 2007.

The data showed the movement of the northern part of the North Andean block – a microplate sandwiched between the Nazca and South American plates, causing it to interact with the sinking Caribbean Plate.

Along with a realistic slab configuration, the team assessed the extent and extent of inter-plate closure along the boundary, where stress can build up without being removed by an earthquake.

“The study provides the first evidence of a shallow, confined region south of Cartagena. This indicates that this segment of the Caribbean-South American Plate boundary in northwest Colombia may be the locus of significant earthquake and tsunami hazard, ”said Lisarazo.

“It is also necessary to continue to densify the GPS network in the country, increasing its coverage and real-time operation.”

“Continuing deformation and the possibility of earthquakes in northwest Colombia due to slow subduction of the Caribbean Plate, as identified by GPS” – Lizarazo, S., et al. – Seismological Society of America (SSA)