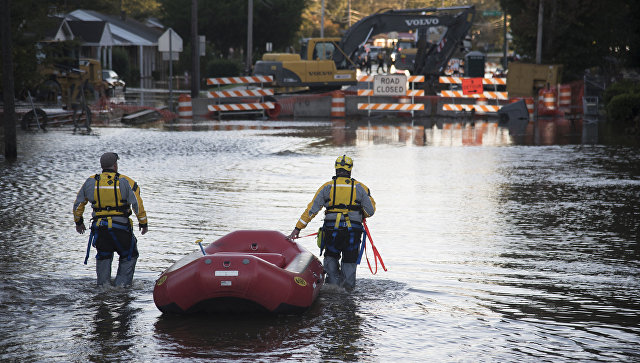 Scientists predict strengthening and increase of hurricanes at the northeast coast of the USA because of global warming that can lead to flooding of New York, Washington and other coastal American megalopolises.

“Our research shows that the storm threat to the northeast coast of the USA constantly grows because of shift of hurricanes to the North. This process began in the 19th century because of emissions of the greenhouse gases produced by mankind and if they proceed then coast of the USA will visit more and more frequent and strong hurricanes that will become accident for financial centers and megalopolises in the northeast of the country” — Lisa Baldini from the Durham university (USA) declared.

Today many coastal cities of North America and Europe, including Washington and New York, are under the threat of flooding because of a special geological phenomenon – so-called lifting of rocks. Similar “immersions” can happen for the most different reasons – can be guilty of it as the person extorting water from the artesian wells and various geological processes caused by a melting of glaciers far back in the past and other the things, not bound to people.

Still the larger threat for them as Baldini and her colleagues declare, is born by hurricanes which are gradually displaced from the southern Atlantic towards the northeast coast of the USA today. Authors of article found, studying stalagmites in one of caves in Belize, far from the USA, that this process has not casual character and that it is caused by the climatic changes generated by activity of the person.

This cave as scientists tell, is located near the seashore, and waters of Atlantic often get to it in those days when they are captured by hurricanes. This water influences body height of stalagmites in a cave, changing their chemical composition that allowed climatologists to trace how force and frequency of hurricanes in the Caribbean Sea changed and

Studying this “the climatic chronicle”, scientists encountered something unusual – in the last 150-180 years “epicenter” of storm activity several times moved. At first it moved towards the equator that occurred at the end of the 19th century and the beginning of the 20th century, and then it began to move in the northern direction, having reached the initial position by the beginning of the current century.

The similar strange movements as scientists believe, are caused by two things – mass emissions of greenhouse gases and aerosols in the atmosphere which just began at the end of the 19th century during approach of the first production revolution in the USA.

The shift of hurricanes to the South if to follow this hypothesis, is explained by the fact that the first factories and power plants burning coal and wood fuel threw out a huge number of droplets of sulfuric acid and other aerosols in air which emergence in the atmosphere considerably cooled it and forced tropical hurricanes to be displaced to the North.

In the second half of the 20th century when concentration of CO2 in the atmosphere reached a certain critical point and average annual temperatures considerably increased, work of an Earth’s atmosphere on this part of Atlantic sharply exchanged. So-called “Hadli’s cells”, special networks of airflows in the atmosphere which transport air masses from tropics to midlatitudes considerably extended, having moved on several hundreds of kilometers to the North Pole.

As a result of it hurricanes began to move slowly but surely to the North, and this “migration” as climatologists consider, will continue also in the next decades. Similarly in Australia the drought zone “migrates” that already led to the mass fires and other serious consequences for economy and human health.

As a result of it if the mankind nevertheless does not begin to fight against climate change or will curtail the current measures for decrease in emissions of CO2, New York and other coastal cities of the USA are expected by the whole series of the most powerful hurricanes which disturbed the Caribbean islands and the southern coast of the USA earlier.