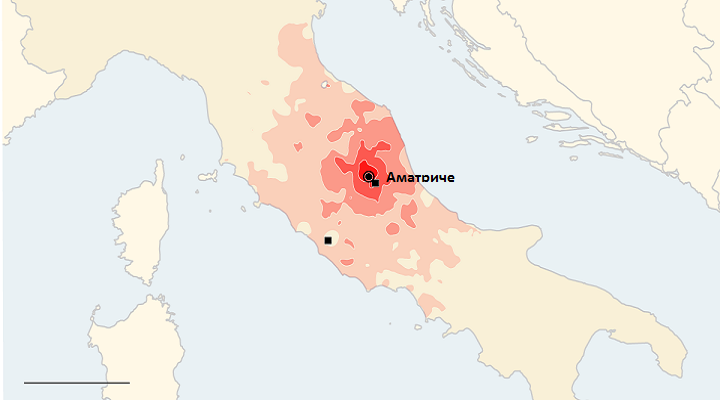 The inhabitants of the Italian cities affected by today’s earthquake, continue to shudder from the aftershocks. The region shaken by aftershocks. The number of wounded is not known, but the account goes on hundreds, in the list of dead has 74 names. Some settlements have turned into ruins. Located in a mountainous area of the city of Amatrice, Pescara del Tronto and Accumuli more affected than others.

An earthquake of magnitude 6.2 occurred on 24 August on the border of the Italian regions of Lazio and Umbria, almost leveled the city of Pescara del Tronto and destroyed most of the town Amatrice. 3 hours was more than 40 major aftershock of magnitude 5.5 on the Richter scale. Many of the victims remain under the rubble of buildings, but the incessant aftershocks have complicated the recovery.

Scientists predict a continuation of the aftershocks and not exclusive of very strong aftershocks with magnitude up to 6 points. They explain that at the moment the basin of the Tyrrhenian sea is slowly expanding, this leads to stretching of the crust along the Apennine mountains and increases seismic activity. The situation is complicated by the movement of tectonic plates on the East by the Adriatic sea and the presence of a large fault running along the ridges of the Apennines with the off from the main fissure cracks. Many cities are right on top of these faults, which caused catastrophic destruction.

It is worth noting a strange coincidence – exactly 1937 years ago in 79 August 24, in Italy the eruption of mount Vesuvius, which wiped off the face of the Earth cities of Pompeii and Herculaneum. Then the disaster claimed the lives of around 16,000 people.