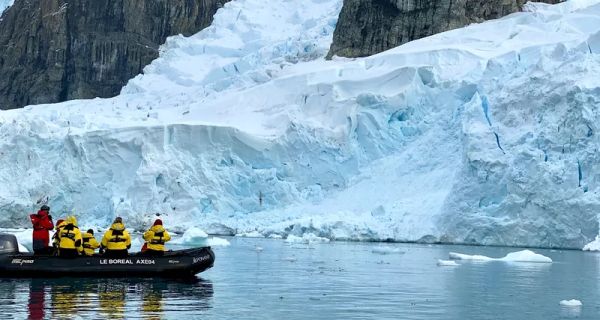 We often hear about the catastrophic consequences of climate change, but it is impossible to feel or see them overnight. Scientists at the Potsdam Institute for the Study of Climate Change have created an animation that shows the shocking changes in Antarctica due to global warming. After such shots, most likely, everyone will think about the future of our planet.

The authors of the study say that the warmer it gets, the faster the ice melts and this can lead to a significant rise in sea levels. In their work, the team did not set a specific timeline, but some experts suggest that the entire continent will be ice-free for 150,000 years if human behavior does not change.

The shocking animation shows the rapid disappearance of the ice sheet as the temperature continues to rise. Experts say that even a small increase can make a huge difference. A temperature rise of more than 4 degrees above pre-industrial levels will result in a 6 meter rise in sea level! This will have a devastating impact on low-lying countries, as well as cities such as London, Tokyo and New York.

If temperatures continue to rise, or even remain at the same level as now, then there is no doubt that Antarctica will turn green. Scientists say that this has not happened for many millions of years.

Andrew Shepard, director of the Center for Polar Observation and Modeling at the University of Leeds, who was not involved in the study, notes that while this scenario may very well be real, it is not something that humankind will catch anytime soon. “These are long-term projections of how much ice Antarctica will lose, possibly in 150,000 years. While we will be gone, this is a clear warning that the melt cannot be reversed unless we can cool our planet to temperatures below pre-industrial temperatures. Now is the time to act. ”

In a new paper published in the journal Nature, the researchers argue that the only way to restore Antarctica and prevent sea level rise is to return to pre-industrial processes. But since this is not feasible, it is hoped that we will keep the temperature even slightly lower to stop the worsening of the situation.