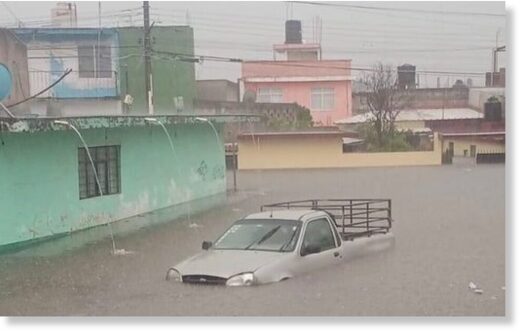 After heavy rains, several areas of the Mexico Valley were flooded. The capital and the state of Mexico City were the hardest hit by the flooding.

Mexico Valley, a region that includes Mexico City and the states of Mexico City, Hidalgo and Tlaxcala, has accumulated large amounts of water, leading to road closures, flooding of the subway network, businesses and private homes, which also occurred in states such as Jalisco and Veracruz.

The eastern neighborhoods of Mexico City and neighboring areas of Mexico State demanded urgent action from the authorities, and water system officials arrived in various areas to try to deal with the flooding.

The most affected municipalities were Ixtapaluca and Los Reyes La Paz, and within the capital, Tlalpan and Istapalapa, while parts of the Mexico-Puebla highway were cut off by the floods.

Ixtapaluqui residents often suffer from flooding and blame authorities for not maintaining drainage systems, saying officials pump out floodwaters but don’t focus on the root of the problem.

“Whenever it rains heavily, it happens,” said Bruno Melchor, who lives in Alfredo del Mazo, the lower part of Ixtapaluca, where the floodwaters reach.

He said the pumps work for a few days, then stop working, and no one does anything to fix them.

“I assume it’s because the drainage system is clogged,” he said.

Another neighbor, Sarai Pineda, said the same thing happened three years ago and eight years ago because the water has no way to drain and gets into residents’ homes.

For residents in a very popular neighborhood, every flood means starting from scratch, as they usually don’t get much help from the authorities, despite losses in furniture, documents, appliances and clothing.

“There’s nothing left to do but start over. You feel the misery when you start scooping water and see your lost things… We don’t live in luxury, and we have to start all over again, all because of bad conditions,” Pineda said.

Meteorological services forecast heavy rains in nine areas of the country: Chiapas, Hidalgo, Nuevo León, Oaxaca, Puebla, Queretaro, San Luis Potosí, Tamaulipas and Veracruz, some of which have had heavy rains for days.