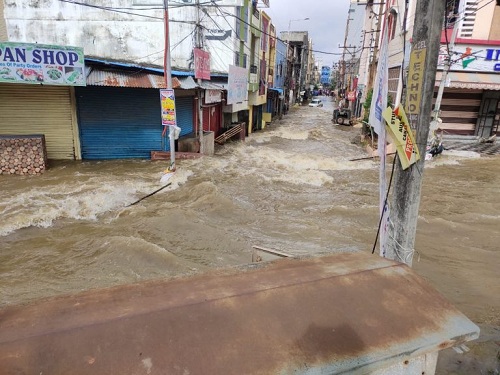 A deep tropical depression in the Bay of Bengal brought days of heavy rains to parts of southern and western India, causing flooding in the states of Telangana, Andhra Pradesh, Karnataka and Maharashtra.

In Telangana, media reports that at least 15 people have died in floods and rain-related incidents following heavy downpours.

Telangana’s capital, Hyderabad, is one of the hardest hit areas, with raging flood waters pouring down city streets, damaging buildings and dragging away cars. According to the disaster authorities, nine people died in the collapse of the wall due to heavy rain in the Chandrayangutta area. Over 1,000 people were rescued or evacuated into the city by teams from the state and national disaster response forces along with military personnel.

415 houses were damaged or destroyed, and 6,616 people were evacuated, 4864 of them stayed in 32 refugee camps. Floods in the state have killed at least 9 people in the past 2 days.

In Karnataka State, floods have affected 150,000 people in the state in the Kalaburagi and Bidar regions since 13 October.

A total of 316 homes were seriously damaged or destroyed, and 2,695 were damaged. More than 40 assistance centers have been created, in which as of October 14 there were 4,864 people. One person reportedly killed in a house collapse due to heavy rain.

Meanwhile, in the state of Maharashtra, parts of the Kumbhar Ghat wall on the Chandrabhaga River in Pandharpur in the Solapur region were damaged by heavy rain and flooding. As of October 14, 6 people were killed, the search and rescue operation was terminated.