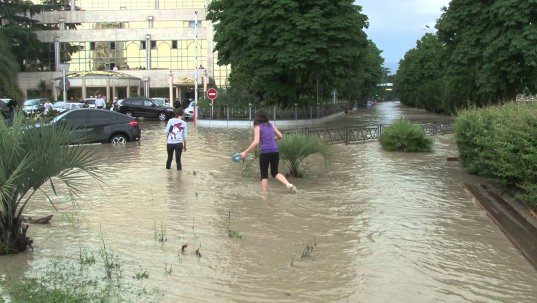 Employees of the Southern Regional Search and Rescue Unit EMERCOM of Russia evacuate people who were on the rivers in Sochi during a sharp rise in water levels.

The rescue team of the Emergencies Ministry receives telephone messages with a request to evacuate tourists who were blocked by water on the Psezuapse River in the Lazarevsky district.

Due to the rapid rise in the water level, a group of people who rested on a stone island in the mouth of the Psezuapse River, was cut off from the shore by a stream of water. Rescuers Lazarevsky unit of the Ministry of Emergency Situations Ministry of Emergency Situations evacuated the victims from a dangerous place with the use of climbing equipment.

A total of 15 adults and 4 children were rescued at Psezaups, none of whom needed medical care. In some places, several times for the evacuation of people, the Ministry of Emergency Situations staffed a hanging ferry.

In addition, the day before the employee of the YURPSO Vitaly Orekhov during his weekend saved the men and women drowning in the Sochi River.

The water level in the rivers of Sochi rose very quickly. The stream of water instantly picked up the man and woman from the shore and carried it away. Independently they could not get out because of the rapid current.

Meanwhile, a nearby Sochi rescuer, using a stick, pulled a woman ashore, and a man who had lost strength brought him out of the water in his arms.

Earlier, the authorities of Sochi issued a warning about bad weather – tornadoes and showers, which can cause a sharp rise in the water level in the rivers.