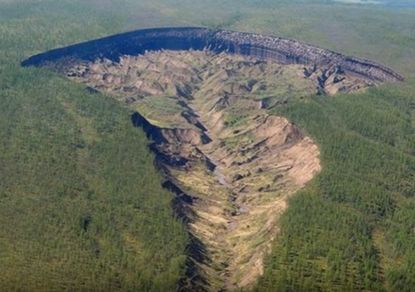 Scientists express great concern about the rapid increase in the Siberian crater Batagayka, which locals call “the gates of hell.” According to the researchers, the rapid growth of the crater can lead to unfortunate consequences not only for the local population, but for the entire planet.

The famous Siberian megabasin began to form in the 1960s after deforestation in eastern Siberia. Deprived of natural protection, the earth began to heat up, which led to the melting of permafrost and the formation of craters. As a result, pipelines are damaged, asphalt is cracked on roads and even whole houses go underground.

“Permafrost, very rich in ice, begins to melt from the top down, the ice disappears, and a whole new landscape is emerging,” says Julian Marton of the University of Sussex, UK. And with the growth of the crater, the process of melting the frozen ground accelerates, and this is accompanied by the release of a huge amount of methane into the atmosphere. According to scientists, the permafrost of the Northern Hemisphere can contain about 50% of the Earth’s methane reserves. And methane has an even stronger greenhouse effect than carbon dioxide.

As a result, emissions accelerate warming at the global level, while scientists are afraid even to guess how these evaporation will affect the Earth’s atmosphere.

At the moment the length of the “hellish gates” is about one kilometer, and its depth reaches 90 meters. The crater grows by an average of 15 meters per year, and in warm seasons, the growth rate increases to 30 meters.

“This threatens not only the infrastructure, no one can stop it, there is no technical solution capable of interrupting the formation of these craters,” explains Frank Guenther of the Alfred Wegener Institute in Potsdam, Germany.

Now the specialists have only to study the “gates of hell” and hope to understand what will follow the changes in the Siberian climate.