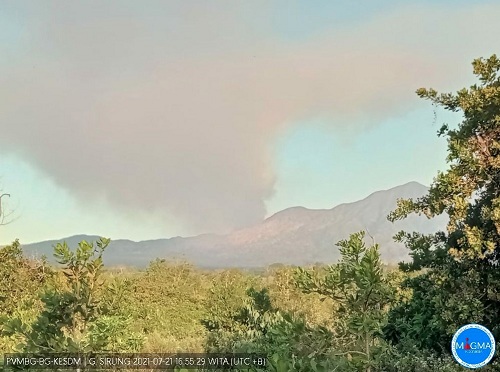 According to the Sirung Volcano Observatory, the best estimate of the top of the ash cloud is about 2.8 km above sea level, but it may be higher than what can be clearly observed.

The ash cloud is moving northward. Its height was estimated by a ground observer.

Seismicity at the volcano showed no significant change, but the ash outburst could happen again.

The last eruption at Sirung volcano occurred on July 8, 2015, when a plume of ash spread 55 km west of the volcano at 1.5 km above sea level.

On May 8, 2012, Sirung Volcano experienced a 3-hour eruption. The eruption was accompanied by loud noises and red-hot tephra rising 10 m above the crater.

The explosion created an ash plume that rose up to 3.5 km above sea level and swept northward, forming ash plumes up to 4 mm thick near the crater.