Six people killed by elephants in a week in the state of Chhattisgarh, India 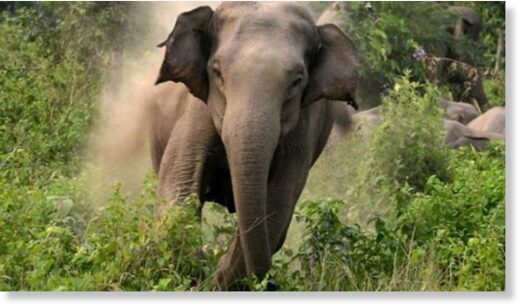 Two people have been killed by wild elephants in separate incidents in the Mahasamund district of Chhattisgarh state, bringing the number of such attacks in the state to six in the past week, officials said.

In the first case, an elderly man named Raju Vishwakarma, a native of Mahasamund, 50 kilometers from the state capital Raipur, was killed by an elephant near Gaurheda village as he was riding with two other people on a motorcycle, said Pankaj Rajput, head of the (Mahasamund) forest department.

Suddenly colliding with an elephant on the road, the man driving the two-wheeler lost control of it, after which Vishwakarma, fell from the vehicle.

While the other two managed to flee the scene, the elephant grabbed Vishwakarma with its trunk and trampled him to death.

Later, a few kilometers away, the same elephant attacked and killed another man, Parmeshwar (30), in a field on the outskirts of Jhalhamariya village.

The relatives of the two victims were given urgent aid of 25,000 rupees each, and the rest of the compensation will be given after the necessary formalities are completed.

Since this incident, eight people have been killed in elephant attacks in Mahasamund District this year.

Forestry officials warned residents of more than a dozen villages in the area about elephant movements and warned them not to enter the forests after dusk.

On September 7, a man was trampled to death by an elephant in Bandora village in Mahasamund, and the next day a married couple and their son were killed in a similar attack in Surguja district.

There have been several recent incidents of human-elephant conflict in several parts of the state.